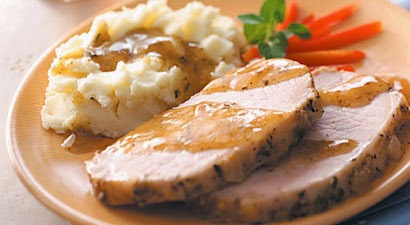 Here's something kid tested by my kids, and mother approved by me! It's also really easy to prepare and cooks in the crock pot. This recipe comes from Reader's Digest, and they suggest serving it with mashed white potatoes. Rice works well, too. Enjoy!

For gravy, strain cooking juices and skim fat.  Pour 1 cup into small saucepan. Combine corn starch and water until smooth.  Stir into cooking juices. Bring to a boil, cook and stir two minutes or until thickened.

Do you have a favorite pork roast recipe that your mom used to make? Thanks for visiting, and have a wonderful week!

"There is nothing so annoying as to have two people talking when you're busy interrupting." Mark Twain

Shall I go on? I think not. First of all, there's nothing wrong with using "said" as a dialogue tag. It's like the ugly chain link fence that when painted black, becomes invisible. Readers are less likely to notice "said," because it easily blends in.

Too many different verbs are distracting, as in the example above. But that doesn't mean you can't use different verbs at all. You might want to say something stronger like hissed or spat for certain situations, but not too often. And make sure the words you choose in those instances have lots of s's that create an actual hissing sound or flying spittle!

You probably know, however, that dialogue tags aren't necessary for each line of dialog. Plain old dialogue can be used for several lines, or gestures can be used in place of tags. Just don't overdo the gestures.

Mary ran a hand through her hair. "John, even though it's not fair to Evan, I can't live without you."
John sighed. "Mary, we'll have to tell him."
Mary eyes widened. "But there's no telling what he'll do! He might--"
"Don't worry." John embraced her. "Even though he's a convicted felon, he's been through anger management." John kissed her neck. "Everything will be fine. Trust me."

You get the message. Now, one last word on dialogue tags. Make sure they really are dialogue tags. People don't smile, laugh or gasp their words. Here's one last example that correctly incorporates everything discussed today:

"Oh, John, you're impossible!" Mary laughed.
He smiled. "I know."
A door opened. Evan stepped from the closet. "Just what are the two of you trying to pull?"
Mary gasped, pulling from John's embrace. "How much have you heard?"
"I've heard enough! My own brother, and the woman I love!" When Evan reached in his pocket, John stepped in front of Mary.
"What?" Evan said. "You think I have a gun?" He pulled out a granola bar and unwrapped it. "As far as I'm concerned the two of you deserve each other with all that rotten dialogue!"

I suppose you've probably read enough, so I'll stop now! But I hope this tip on dialogue tags has been helpful!

Any advice you'd like to share on dialogue tags? Thanks for stopping by and have a great week!

What's the Story Behind Your Name?

"Words have meaning and names have power."  Unknown

Unless we choose a stage name or pseudonym, or legally change our names, we're stuck with the monikers given to us by our parents for life.  Some parents put a lot of time and consideration into this by scouring baby name books.

While some future moms and dads want a name that's pleasing to the ear, others may choose one for its strong symbolic meaning, as well, for example, Gerald: mighty with the spear.  A name chosen for a baby could be one passed from generation to generation, or perhaps taken from the Bible.  Historical heroes and heroines can be popular name choices, too.

But not everyone puts that much thought into the naming process.  A friend of mine from college said that when she was born, her father asked two nurses what their names were.  One was Karen, the other Sue.  So my friend was named Karen Sue!  That was easy.

Lots of name choices are influenced by popular culture.  During the Depression, many little girls were named Shirley, after child movie star Shirley Temple.  I know someone who was spared that fate when her father insisted she be named Carmen!  She's ever thankful for his intervention and loves the more exotic and mysterious name chosen for her instead.

The girl name Madison was inspired by the 1984 movie Splash.  Nowadays, Isabella is one of the most popular girl names because of the books and films in the Twilight series.   I read an article not long ago about popular baby names inspired by films and found myself sneering.  "It's amazing how many parents name their kids after characters in movies," I thought condescendingly.  But then I had to scold myself.

Ever heard of West Side Story?  My mom was pregnant with me when she saw it.  My name would've been Carol, but after hearing the song "Maria," you can figure out the rest of the story.  I, along with probably hundreds of thousands of other little girls in the U.S. (of non-Hispanic origin), was named Maria, back in...well, it was a long time ago.

Although a name is a serious thing, once in a while, you hear some that sound as though they were chosen on a whim.  Several years ago, my husband overheard a conversation in the grocery store between two women.  One was quite excited because she'd found the perfect name for her soon to be born daughter.  "Formica Dinette!" She exclaimed happily to her friend.  "I saw it in the Sears Catalog!"  For the child's sake, I hope someone talked her out of that!

What's the story behind your name? Thanks for stopping by and have a great week!

Men and women are different--especially where communication is concerned! Ever struggle with gender specific dialogue in your fiction writing? Hope these tips will help!

Men are more direct and brusque in tone. They use simpler vocabulary with fewer modifiers, and are likely to use one word responses and shorter sentences.  Instead of talking about people and feelings, they’d rather talk about things.