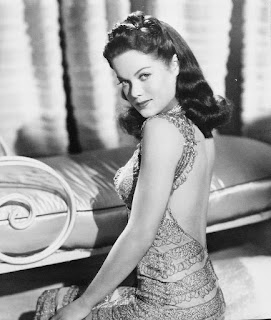 I happened to stumble upon this interesting and talented actress who never quite became a big star. Her story is an interracial one, so of course I found it fascinating! Check out what IMBD says:

In a situation that closely recalls the Fannie Hurst story "Imitation of Life" in which a girl strives to pass for white, beautiful light-skinned African-American actress/singer/dancer/bandleader Dona (pronounced "dough-nuh") Drake, for the sake of her career, denied her heritage and passed for white (in her case Mexican) for the duration of it. While it did not make her a true star, her zesty talents and charm went a long way in the field of war-time music. Unlike the story, Dona, however, did not abandon her parents or deny her parentage. 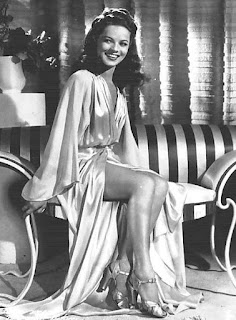 instruments there as entertainment. Following schooling, she moved to the Big Apple where (billed as Una Villon) she caught the fetching eye of Broadway and nightclub talent ("Murder at the Vanities" (1930)) and worked as various chorines on stage, nightclubs and Earl Carroll revues. Claiming she was Latino, she even went so far as to learn Spanish.

In 1935 Dona changed her name to Rita Rio to emphasize her "ethnicity" and spiced up her image even further when she earned a featured spot in Eddie Cantor's film Strike Me Pink (1936). While it did not lead to more film work, it did enable her to form her own glitzy and glamorous all-girl band, Rita Rio and Her Rhythm Girls [aka The Girlfriends], which toured successfully. 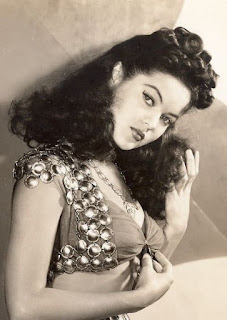 Dona freelanced in Without Reservations (1946), co-starred with Kent Taylor in Dangerous Millions (1946) and was featured in Another Part of the Forest (1948) (as a girlfriend to weaselly Dan Duryea), Beyond the Forest (1949) (as Bette Davis' Indian maid), The Girl from Jones Beach (1949) (as Eddie Bracken's paramour) and as the gold-digging second lead in So This Is New York (1948). After her marriage and a daughter, Nia Novella, was born, she toned down her filmmaking but returned in the mid-1950s to some film and TV parts before retiring in 1957 due to health and emotional issues (heart ailment, seizures/epilepsy). She and Travilla separated in 1956, but never divorced and still appeared together at functions on occasion. Dona died of pneumonia and respiratory failure in 1989 with Travilla dying one year later.

I had never heard of Dona Drake. Had you?  Check her out on Youtube singing "Wha' D'ya Do when it Rains?" Thanks for visiting and have a great week!
Posted by Maria McKenzie at 6:04 PM

I had not heard of her before.

She did a lot, but under several different names. Maybe if she'd only used one she would've made more of an impact.

I hadn't heard of her either. She was pretty and had a nice voice. Thanks for telling us about her.

My pleasure, Lydia:). I wondered about her daughter too. I'll have to do a little digging and see what I can find.