Love Against the Odds 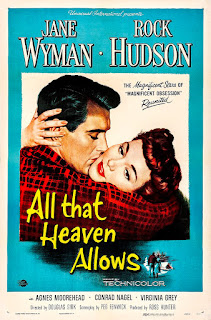 Not long ago, my friend Lisa recommended three movies that she knew I'd enjoy, all from different time periods. Two dealt with interracial love (one of my favorite topics), while the third was a May/December romance.

Here's a brief summary of each film from IMDb:

All That Heaven Allows (1955): An upper-class widow falls in love with a much younger, down-to-earth nurseryman, much to the disapproval of her children and criticism of her country club peers.

Ali: Fear Eats the Soul (1974): A lonely widow meets a much younger Arab worker in a bar during a rainstorm. They fall in love, to their own surprise-and to the outright shock of their families, colleagues, and drinking buddies.

Far From Heaven (2002): In 1950s Connecticut, a housewife faces a marital crisis and mounting racial tensions in the outside world.

I don't claim to be a movie reviewer, but I'll share my thoughts regarding each film. My favorite was the sappy melodrama All That Heaven Allows. Why? Because it had a happy ending! 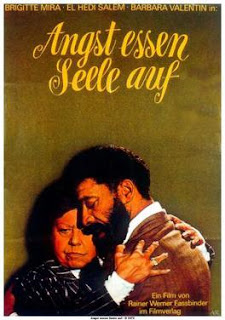 All That Heaven Allows focused on socio-economic status and an older woman younger man relationship. I loved how the main character Carrie's detached/clinical social worker daughter couldn't handle the situation. Her WASP son wasn't any better. Ron, the love interest was a novelty to Carrie at first (a nice set of muscles, as her son said), and she was willing to let him go to keep her children's approval (and maybe that precious social status, too). But love conquered that in the end and they became equals who'd live a non-snobbish lifestyle. The doctor character was a voice of reason and support for Carrie, so that was refreshing.
Ali:Fear Eats the Soul was fascinating. It was interesting to see how the issue racism and ethnicity was addressed in Europe at that time. Also, the relationship of a much, much older (and not very attractive) woman and a younger man was intriguing. When the main character Emmi falls in love with Ali, she loses everything. It's even mentioned that she's not really even German because she has a Polish last name. Her children, neighbors, and workmates offer her no support and are quite cruel. Though this is difficult for Emmi, Ali is too important to her and she won't end their relationship.
After they return from a long vacation, Emmi is accepted back by her community because of what she can (monetarily) offer. She even participates in alienating a new co-worker from Yugoslavia. With her place restored, she wants to change Ali, perhaps assimilate him. At this point, he seems like more of a possession (and a nice set of muscles), and not an equal. He eventually becomes an equal in their relationship, but that doesn't happen until after she drives him into another woman's arms. Though I was happy Emmi and Ali reunited, I was saddened when she told him he had her permission to stray. The stomach ulcer told Ali's story. The discrimination and rejection he faced ate away at his soul. The landlord's son was supportive of their relationship early on, so that was nice to see. 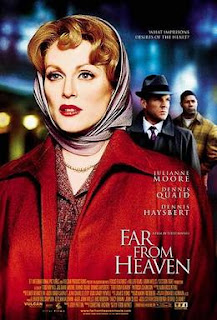 Far From Heaven (inspired by the other two movies mentioned above) was a really hard hitting film! No age issue, just Yankee racism. NO happy ending here or even a supportive character, aside from perhaps the maid. This movie portrayed the ultimate relationship (black man/white woman) where no lines could be crossed in 1950s America!
Frank, the gay husband, is a fascinating angle. And when he hears talk of his wife, Cathy, being seen with a black man, he blows quite the gasket! He'd worked so hard at establishing the perfect life for his family (and hiding his gay affairs) and she was destined to destroy all he'd accomplished. Cathy has to lie about her excursion with Raymond, her black gardener. And though nothing transpires between them, when she does open up to her best friend, Eleanor, about her feelings of just thinking about him, Eleanor drops her as a friend.
Raymond seems to be a secret desire, one left hidden and best not discussed. He is a fantasy, something Cathy longs for, but knows she can never have. And knowing he feels the same and desires her makes it all the more heart-wrenching, especially after watching her live with an alcoholic husband who doesn't really love or desire her. The ending is sad, but realistic.
Have you seen any of these movies? If so, do you have any thoughts to share? Thanks for visiting and have a great week!
Posted by Maria McKenzie at 3:14 PM