I had a dinner  party over the weekend, and in addition to chicken, rice and salad, I wanted a summery side dish to serve. I love black bean salad but I'd never made it and didn't have a recipe. I found this dish at MyRcipes.com and was very pleased with the result, as were my guests!  It was so good, I thought I'd share it today. Enjoy! 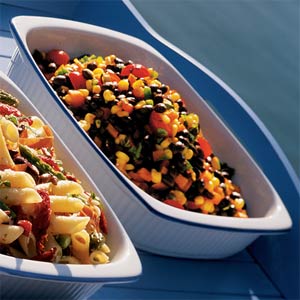 Do you have a favorite Corn and Black Bean Salad recipe?  Thanks for visiting and have a great week!
Posted by Maria McKenzie at 8:39 AM 5 comments:

She Wasn't the First!

So, Rachel Dolezal has been all over the news since her parents outed her as white! I'd never heard of her, but studying her image, I never would have suspected that she wasn't black.

Fair-skinned blacks have passed for white throughout the ages, but it's certainly out of the ordinary for a white person to want to pass as black. As strange as Ms. Dolezal's situation is, she isn't the first white person to do that. You've probably never heard of Clarence King, but his
story is told in Martha A. Sandweiss's book, Passing Strange.

All right, Clarence King passed for love, so what was Ms. Dolezal's motivation?

Thanks for visiting and have a great week!
Posted by Maria McKenzie at 11:06 AM 4 comments:

Christopher Lee: The One and Only 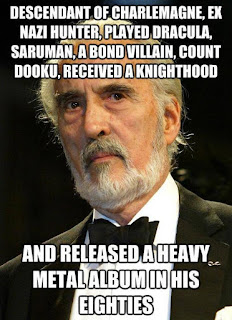 The late Christopher Lee was quite a fascinating individual. I found this article, Chirstopher Lee: Renaissance Man  in Inquisitir.com and thought I'd share it today!

Christopher Lee died June 7 at the age of 93, but what seems to be common among those who knew him is that he was a regular Renaissance man.

Director Peter Jackson wrote was likely the most touching of all the tributes that flowed throughout social media. According to Jackson, Christopher Lee was “a true gentleman, in an era that no longer values gentleman.” Jackson worked with the venerable actor through five movies between the Lord of the Rings and The Hobbit series of films. Lee’s status as a gentleman is not the only characteristic for which he was known, however.

Christopher Lee‘s parents — a retired British officer father and an Italian countess mother — divorced, and when his mother remarried, it was to author Ian Fleming’s uncle. This is, of course, only one factor that ties Christopher Lee to the James Bond legacy; Bond fans doubtless remember Lee’s chilling turn as Francisco Scaramanga, the titular Man with the Golden Gun. This was only a part of his legion of work that would forever cement his part in cinematic history; he took part in no less than at least five historic movie series, including Bond.

Before taking on the roles of Star Wars’ evil Count Dooku or Lord of the Rings’ Saruman, Christopher Lee had a past with the British Special Forces, could apparently speak seven languages, and was known for his love of heavy metal music. He was a Lord of the Rings aficionado as well and knew author J.R.R. Tolkien. Older generations would know him as the penultimate Dracula from the Hammer Horror series of films...

Did you know any of this about Christopher Lee? For the complete article, click here. Thanks for visiting and have a great week!
Posted by Maria McKenzie at 6:30 AM 7 comments:

"Don't take life too seriously; you'll never get out of it alive." Elbert Hubbard

Not long ago, I had the amazing opportunity to attend a "lively" and enthusiastic program called Drowned Dames, Mauled Men, and Crispy Critters: A Body Disposal Primer for Writers presented by Jeanne Adams. Ms. Adams became a writer after working in the funeral business for several years. Now she's the author of thrilling suspense and magical romance.

I learned quite a few things that I'll be applying to my writing. One of my books involves a shooting, a coroner, a mortuary and a funeral. So this workshop was rather timely for me, and Ms. Adams was eager to answer any and all questions!

Here are a few tidbits of interest I learned:
Hope you've found these little bits of body disposal trivia informative. What I've shared barely scratches the surface of Ms. Adams presentation. So if you ever have the chance to go, don't miss out!

Any thoughts of your own on body disposal? Thanks for visiting and have a great week!


So, I'm on a role! I had to feature Mission Impossible this week. I loved this show as a kid! Not long after I got married, there was a Mission Impossible marathon on one of the cable stations. I believe this was around 1996. I couldn't wait to camp out and watch it. My husband, however, admitted that he'd never seen the show. Since we're in the same age group, that led me to believe he'd grown up under a rock! Needless to say, after the first episode, he was hooked and enjoyed all the shows as much as I did.

If you are of a younger generation and only familiar with the Mission Impossible movies starring Tom Cruise, here's some information about the original television series from Wikipedia:

[The series] chronicles the missions of a team of secret government agents known as the Impossible Missions Force (IMF). In the first season, the team is led by Dan Briggs, played by Steven Hill... Jim Phelps, played by Peter Graves, takes charge for the remaining seasons. A hallmark of the series shows Briggs or Phelps receiving his instructions on a recording that then self-destructs, followed by the theme music composed by Lalo Schifrin. [Click here to hear it!] Mission Impossible aired on the CBS network from 1966 to 1973. The series was reprised in 1988 for two seasons on ABC, retaining only Graves in the cast.


The series follows the exploits of the Impossible Missions Force (IMF), a small team of secret agents used for covert missions against dictators, evil organizations and (primarily in later episodes) crime lords. On occasion, the IMF also mounts unsanctioned, private missions on behalf of its members. The identities of the organization that oversees the IMF and the government it works for are never revealed. Only rare cryptic bits of information are ever provided during the life of the series. 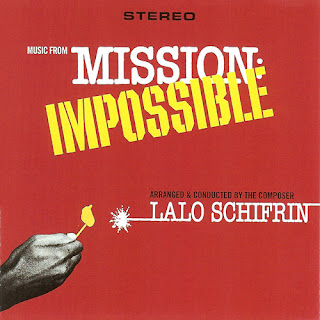 The leader of the IMF is initially Dan Briggs, played by Steven Hill... Hill was replaced without explanation to the audience after the first season by Peter Graves playing the role of Jim Phelps, who remained the leader for the remainder of the original series and in the 1988–1990 revival.In theory, Briggs and Phelps are the only full-time members of the IMF.


As the series was originally conceived, they would form teams made up of part-time agents who came from a variety of professions, choosing their operatives based on the particular skills necessary for the mission. In practice, however (especially after the first season), Briggs and especially Phelps would choose the same core group of three or four agents for every single mission, leading these regulars to be considered de facto full-time IMF agents. Still, many episodes also feature guest stars playing one-time additional agents who have special skills.


Although the Tom Cruise movies are fun and action packed, I still prefer the TV series! What about you?

Thanks for visiting and have a great week!
Posted by Maria McKenzie at 3:16 PM 3 comments: