I'm about two-thirds of the way through writing my next novel, Revelation, which deals with the painful topic of  passing.  While doing research, I stumbled upon the movie Lost Boundaries.  This motion  picture is based on the book by William Lindsay White that tells the true story of Dr. Albert Chandler Johnston, a graduate of Rush Medical College. Johnston's family passed for white while living in New Hampshire. In the movie, Mel Ferrer plays Johnston's character as Scott Carter. A brief synopsis from FilmGordon follows below:

This is a fascinating story I wasn't familiar with. Were you? Thanks for visiting and have a great week!
Posted by Maria McKenzie at 4:36 PM 5 comments:


I published this post back in March of 2011. If you missed it then, hope you'll find it useful now!﻿

"I help turn wannabe writers into gonnabe writers." Randy IngermansonIf you're not familiar with Randy Ingermanson's   AdvancedFictionWriting.com, you don't know what you're missing!  Randy is the author of Writing Fiction for Dummies.  He's also known as "The Snowflake Guy" because of this article.  It outlines the way he designs/constructs a novel, by starting small, then building up until it looks like a story. Hence, the snowflake metaphor. You start with a paper triangle, then keep cutting until you make a more elaborate design emerge.Randy, a writer and award winning author of six novels and one non-fiction book, is also a physicist and self proclaimed computer geek.  To learn more about him, click here.His website is wonderful, and his e-zine is free! It's a monthly publication that provides some great secrets for novelists who want to develop their craft and better market their fiction.  In addition, once you subscribe, you'll also receive his 5 day course entitled "How to Publish A Book," along with his free report on Tiger Marketing.Visit Randy today and take advantage of all of his great free stuff!  Do you have a favorite writing website that you'd like to plug?  Thanks for stopping by, and happy writing!
Posted by Maria McKenzie at 6:08 AM 8 comments:

Nothing beats a great marinade, and this one was created by my late father-in-law. It's wonderful with chicken, but can also be used with beef, pork or even veggies. Enjoy! 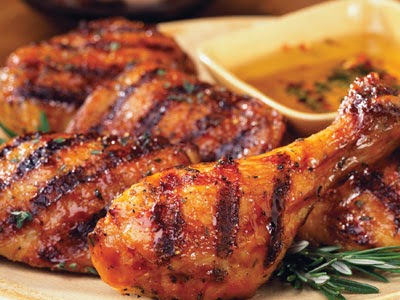 Place chicken in Pyrex dish and set aside. In a small bowl, combine remaining ingredients.  Pour over chicken. Cover and refrigerate eight hours or overnight. Grill until juices run clear.

If you cannot grill, preheat your oven to 425. Place chicken on an oiled baking sheet and bake for 30-35 minutes.

Do you have a favorite grilled chicken recipe? Thanks for visiting and have a great week!
Posted by Maria McKenzie at 5:55 PM 4 comments:

Humphery DeForest Bogart hardly sounds like the name of  a tough guy born and raised on the rough streets of New York.  Well, Humphrey Bogart actually was born in New York City, but his father was cardiopulmonary surgeon, and his mother, a graphic illustrator. The Bogarts lived in a fashionable Upper West Side Apartment.

Spring training has started and baseball season is just around the corner. Today I'd like to share the story of Charles Thomas, the man who inspired Branch Rickey to integrate professional baseball. 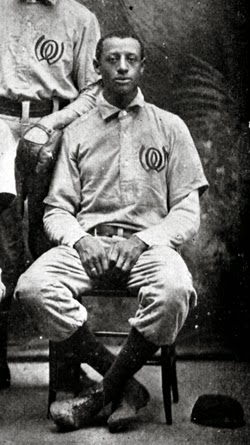 Had you ever heard of Charles Thomas? And by the way, are you looking forward to baseball season? Thanks for visiting and have a great week!
Posted by Maria McKenzie at 12:23 PM 8 comments: