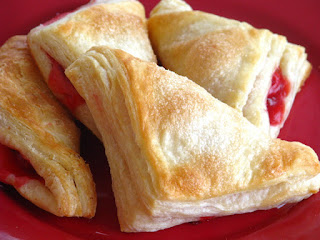 Punchbowl says:
...Turnovers are a delicious pastry that can be enjoyed for breakfast or dessert. They originated in ancient times and are classified as "portable pies." Other dishes in this culinary family include pasties, empanadas, and spring rolls.
A traditional cherry turnover recipe calls for puff pastry, which is stuffed with a gooey cherry filling and then baked until golden brown. There are many variations on this classic treat, though. Some recipes call for cream cheese, extra lemon juice, or even ice cream.
To celebrate National Cherry Turnover Day, bake your own homemade cherry turnovers to share with friends and family! Bon appétit!
I've never made cherry turnovers, but here's a simple recipe from I Wash You Dry ( I didn't include the glaze just to keep it super simple. Check out the link if you want to make the glaze to drizzle on top.)
Super Easy Cherry Turnovers

Do you love cherry turnovers? If so, have you ever made them?

Thanks for visiting and have a great week!
Posted by Maria McKenzie at 5:33 AM 4 comments: 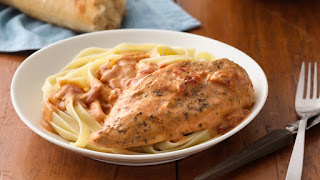 When it comes to cooking, I love quick and easy! Over the summer, my oldest son decided he wanted to cook three meals a week--gourmet meals with Mom's help. We're talking labor intensive with lots of time in the kitchen! The results were wonderful, but crock pot cooking is more my thing. Here's something that sounds really delicious from BettyCrocker.com. Enjoy!

Ten to 15 minutes before serving time, cook pasta as directed on package. In small bowl, stir together cornstarch and water; stir into mixture in slow cooker. Increase heat setting to High; cook uncovered 5 to 10 minutes longer.

Do you prefer quick and easy, or do you like preparing gourmet meals?

Thanks for visiting and have a great week!
Posted by Maria McKenzie at 5:25 AM 4 comments:

"You see things; and you say 'Why?' But I dream things that never were; and I say 'Why not?'" George Bernard Shaw

Are you a writer? If so, what inspires you? A spark of imagination, a snatch of conversation, a true story or a real life experience?

I always find it fun to discover what exactly inspires a writer to conceive a story.

Stephenie Meyer had a dream that inspired her to write Twilight. Margaret Mitchell modeled Pansie O'Hara (who later became Scarlett O'Hara) in Gone with the Wind after herself, and her experience of falling in love with the wrong man.

Those Who Save Us, by Jenna Blum, is fiction based on real stories of Germans living in the United Sates during World War II. The Reader, by German judge and law professor Bernard Schlink, focuses on the generation of children born to parents who lived through World War II in Germany. During the 1960's, as adults, this generation (including Schlink) questioned what their parents knew and didn't know, and asks how they could have let the atrocities occur. Schlink's moving story focuses on a young teenage boy who has an affair with an older woman. Only years later, as a law student, does he learn of her direct involvement with the concentration camps.

One of my favorite movies is Finding Neverland. In it, the audience sees how Scottish dramatist J.M. Barrie, through imagination and his real experience of befriending three boys (and their evil Captain Hook like grandmother) came up with the idea for the stage play Peter Pan. "With a wee bit of imagination," Barrie (portrayed by Johnny Depp on film) says, "anything is possible."

Right now a short story is running through my head. I heard Oprah Winfrey say at the conclusion of her show one day, "Our cameras will be at Celine Dion's performance with today's guest at Madison Square Garden next month, but I won't be able to attend."

As writers, we allow our imaginations to grow wild with just a seed of inspiration. What fun!

What inspires you? Thanks for visiting and have a great week!