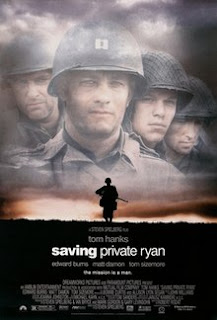 
I wanted to see it then,
from Wikipedia. I didn't want to read the whole plot summary
since I haven't seen the movie yet. But perhaps I will today!

Private Ryan is a 1998 American epic war film directed by Steven Spielberg and written by Robert Rodat. Set during the Invasion of Normandy in World War II, the film is notable for its graphic portrayal of war, and for the intensity of its opening 27 minutes, which includes a depiction of the Omaha Beach assault during the Normandy landings. It follows United States Army Rangers Captain John H. Miller (Tom Hanks) and a squad (Tom Sizemore, Edward Burns, Barry Pepper, Giovanni Ribisi, Vin Diesel, Adam Goldberg, and Jeremy Davies) as they search for a paratrooper, Private First Class James Francis Ryan (Matt Damon), who is the last-surviving brother of four servicemen.

In the current day, an elderly veteran visits the Normandy American Cemetery and Memorial with his family. Upon seeing one particular grave, he falls to his knees overcome with emotion. The scene then shifts to the morning of June 6, 1944, as American soldiers land on Omaha Beach as part of the Normandy Invasion. They suffer heavy losses in assaulting German defensive positions of artillery and machine guns raining down intense fire on the American forces. Captain John H. Miller of the 2nd Ranger Battalion assembles a group to penetrate the German defenses, leading to a breakout from the beach. Elsewhere on the beach, a dead soldier lies face-down in the bloody surf; his pack is stenciled Ryan, S.

I didn't read any further so I wouldn't ruin it for myself! Click here for the complete plot.

Have you ever seen Saving Private Ryan? Thanks for visiting and have a great week!
Posted by Maria McKenzie at 6:23 AM 4 comments:

Although I didn't get up at the crack of dawn on Saturday to watch the Royal Wedding, I have been reading about it all weekend. The bride's dress was indeed beautiful, but I was much more fascinated with her tiara! Here's the scoop from People.com: 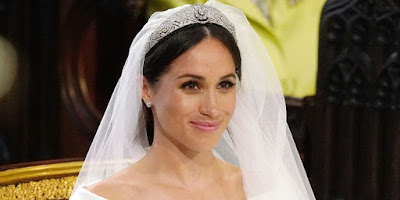 Meghan Markle‘s royal wedding tiara holds as much — if not more — significance as the gown she wore down the aisle. While some speculated that Meghan might skip the tradition altogether, Prince Harry‘s bride followed royal protocol and paid homage to her new family through the meaningful, sparkling accessory which has been in the British royal family for decades.
Meghan followed in Kate Middleton’s footsteps wearing a tiara straight from the Queen’s jewelry vault, the Queen Mary Diamond Bandeau. 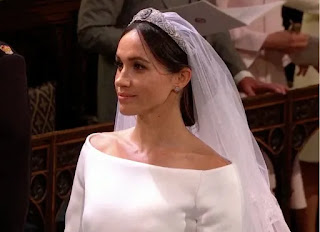 According to Kensington Palace, the English tiara, which features diamonds set in platinum, was made in 1932 and features a center detachable brooch made of ten diamonds  back to 1893.
The tiara is “formed as a flexible band of eleven sections, pierced with interlaced ovals and pavé set with large and small brilliant diamonds.”
The palace confirms that the diamond bandeau was a present to the then Princess Mary in 1893 by the County of Lincoln on her marriage to Prince George, Duke of York, who would become King George V. The bandeau and the brooch were passed down by Queen Mary to The Queen in 1953. The queen’s sister Princess Margaret famously wore the piece to events.
To read the entire article, click here. Did you watch the wedding live? Thanks for visiting and have a great week!
Posted by Maria McKenzie at 5:37 AM 5 comments: 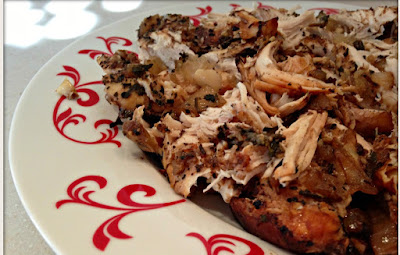 I've been experimenting with Mediterranean cooking and recently ordered The Mediterranean Slow Cooker by Michele Scicolone. I love this book! Here's a healthy recipe I made last week and served with rice and a salad. It's really delicious and Hubby gave it two thumbs up. Did I mention that it's really easy to make? That's my favorite part. Enjoy!

In a medium bowl, whisk together the vinegar, mustard, garlic, rosemary, capers, 1/2 t salt and pepper to taste. Dip the chicken pieces into the mixture, turning to coat on all sides. Place the chicken in the cooker and pour on any remaining sauce.

Cover and cook on low 4-6 hours, or until the chicken is very tender and coming away from the bone.  Serve hot.

Do you like Mediterranean food? Thanks for  visiting and have a great week!
Posted by Maria McKenzie at 12:54 PM 2 comments:

Korla Pandit
In searching the Internet for something interesting to blog about, I stumbled upon this fascinating celebrity named Korla Pandit. I'll start by saying before there was Liberace, there was Korla Pandit. Check out this captivating article by Andrew Hamlin from Northwest Asian Weekly
Two hands hold a large censer.  A voice speaks of wisdom and rubies.  A deep, slightly scraggly voice.  The action fades-in to a man in a turban with a jewel mounted between his eyes.  Fixing his eyes upon the camera, Korla Pandit begins his act.
And his act was the Hammond Organ, augmented with a Steinway piano to his right.  Playing mostly organ, occasionally piano, sometimes one with each hand, Pandit played for fifteen minutes on Los Angeles’ KTLA-TV from 1949 until 1951.  He did not rock and roll and he did not get down and dirty with the blues, but he flitted easily between all other types of music, playing popular tunes, show tunes, traditional, and ethnic music from around the world. He was one of the first television stars, but he never spoke on camera.  The narrator off-screen was someone else.
And Korla Pandit had reason to never speak.  Speaking might have given away his secret.
John Turner’s film “Korla” covers the organist’s life from start to finish, but not in that order.  He starts with the censer, the myth, the exotica (for Korla Pandit was a pioneer of “exotica”) and goes considerably into Pandit’s keyboard skills combined with his elegance and mystery, his easy way of wining over an audience.  Pandit’s work grew popular with folks who ironically were into tiki torches and vintage cocktails, folks who wanted to overlook rock and roll or step into a time machine and come out back before rock and roll first rolled. 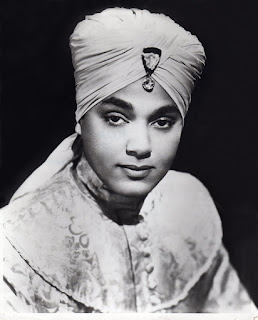 But Pandit’s work, cheesy as it could get, transcended kitsch. He knew how to play to the camera and reach his audience through the camera, with his galvanizing eyes bolstered with the glinting jewel, the white of the turban combined with the milk chocolate of his skin.  He hammered down Hammond keys with the heel of his hand, his palms, and even his forearms. He took chestnuts such as “Over The Rainbow” and gave them fresh illumination with rapid runs, melancholy swells, double-time breaks, and piano intermezzos.
Pandit never admitted to anyone that he was not actually Indian—not from India or elsewhere.  He was not from the Far East or the Near East.  He was born John Roland Redd, in St. Louis in 1921.
The “exotic” persona came partially from his wife, a white lady Beryl June DeBeeson, and partially from a film the future Pandit’s sister appeared in—a film featuring a black man disguised as an Indian.  With a turban and a jewel.
And the fascinating, damnable thing was that passing for Indian worked wonders for him.  He was no longer a black man, but he was one of the first black men to have his own TV show.  His birth certificate lists him as “colored”; his death certificate asserts he was “white.”  His family appears to have gone along with his fake background, although his wife and older son have since died, and his younger son, for whatever reason, does not appear in the film.
He exploited the exotic background story for his own ends and to that extent must be deemed selfish.  But not solely selfish.  Many black people who could, passed for white.  And as Pandit/Redd demonstrated, passing as anything was preferable to being black.
He preached the universal language of music.  He was a fraud, but he was a spiritual optimist.  And as Carlos Santana remarks, he opened vortexes.  Anything seemed possible when he pressed the keys.  Any dimension, any identity.  Any form.  Any triumph.
I had never heard of Kora Pandit. Had you? Thanks for visiting and have a great week!
Posted by Maria McKenzie at 5:30 AM 4 comments: