How Strom Thurmond Influenced Me

I know what you're thinking! How could a dead segregationist governor influence some black woman? Well, let me explain.

My mother is from South Carolina, so all my life I've had ties to the South, and for many years I've known about this "secret child." My mother even knew someone who went to college with her.  So when I'd heard that Ms. Williams had "come out" and written a memoir, I couldn't wait to read it!

The story of Ms. Williams's mother and her relationship with Thurmond was heartbreaking and touching, as well as fascinating.  I couldn't stop reading.  And after I'd finished, I couldn't get the story out of my head.

I kept thinking, what would have happened if Ms. Williams had been born a boy who grew up to become a Civil Rights leader at the same time his father was a segregationist governor.  And another thought was, what if Thurmond, a young law student at the time, had been willing to give up everything to be Carrie Washington?

If you're familiar with my blog, you know that Dear Senator inspired my novel The Governor's Sons.  Ms. Williams's memoir, however, is quite sad.  Her mother was all of sixteen when she became pregnant by the then twenty three year old Thurmond.

Thurmond did care for Carrie, but not to the point of giving up everything for her, and their affair lasted over several years, off and on.  But when she died, Thurmond didn't know until Essie told him.

Thurmond provided financially for his love child and stayed in contact with her all of his life.  Ms. Williams still maintains contact with his family--which is her family too!  I couldn't help but feel for both of them (Essie Mae and Strom) as I read her story.

Thurmond wanted to do the right thing by providing for his daughter and being a presence in her life. But if the truth about her had ever been discovered by the public, his career would have been destroyed.  And Ms. Williams had to settle for what little of himself her father could give her, while he shared the limelight with his wife and their children.

If you're at all interested in race matters and love stories, I highly recommend Dear Senator!

Had you ever heard of Essie Mae Washington-Williams's story before the news broke about it a few years back?

Thanks for visiting!
Posted by Maria McKenzie at 11:37 AM 8 comments:

Tomorrow is Valentines Day and HBO is airing The Loving Story.  This documentary film tells the story of Richard and Mildred Loving, and also examines the current state of interracial marriage and its tolerance in the United States.
When I first read about the Lovings several years ago, I thought what a fitting (and ironic) name for them!
Richard Loving was white, and his wife, Mildred, black. In 1958, since they couldn’t marry in their home state of Virginia where interracial marriage was banned, they went to Washington, D.C. where they could legally wed.  However, upon returning home as a married couple, they were arrested, jailed and banished from the state for 25 years for violating Virginia’s Racial Integrity Act.
The Lovings agreed to leave Virginia and relocated to Washington. By doing this they avoided jail time. But after living there for five years and having three children, they missed family and friends and wanted to return home to Caroline County, Virginia.
Around this time they contacted Bernard Cohen, an attorney volunteering at the ACLU, to request that he ask the Caroline County judge to reconsider his decision.
Cohen and another lawyer challenged the Lovings' conviction, but the original judge in the case, Leon Bazile, upheld his ruling claiming: "Almighty God created the races white, black, yellow, Malay and red, and he placed them on separate continents. ... The fact that he separated the races shows that he did not intend for the races to mix."
The case moved all the way up to the Supreme Court where Cohen made this argument:
"The Lovings have the right to go to sleep at night knowing that if should they not wake in the morning, their children would have the right to inherit from them. They have the right to be secure in knowing that, if they go to sleep and do not wake in the morning, that one of them, a survivor of them, has the right to Social Security benefits. All of these are denied to them, and they will not be denied to them if the whole anti-miscegenistic scheme of Virginia... [is] found unconstitutional."
After the ruling, in their favor (now known as the "Loving Decision") they returned home to Caroline County.
A happy ending to now what seems an unbelievable story—and believe it or not, they were arrested in the privacy of their bedroom during the middle of the night!
Had you ever heard of the Lovings' story?
Thanks for visiting, and Happy Valentine's Day!
Posted by Maria McKenzie at 10:55 AM 10 comments: 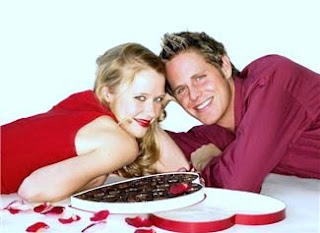 Thanks for visiting!
Posted by Maria McKenzie at 11:05 AM 10 comments: