I love a good thriller, and one of my absolute favorite thriller writers is James Patterson. I admit, sometimes there's a little too much blood and violence, but he always tells such a great story I can overlook those things and just enjoy a great thrill ride!

Patterson novels are hard to put down because, not only are they exciting, they're extremely fast paced and filled with unexpected twists and turns.

Today I thought I'd share a few tips from Patterson on writing commercial fiction found in this Publisher's Weekly article by one of his co-authors, Mark Sullivan.


According to Patterson, "We are in the business of entertainment, not edification or enlightenment...We are interested in giving the reader an intelligent thrill ride populated by outsized people we feel for.” Characters, especially heroes and villains, Sullivan explains, have to be thought about carefully. They have to be human, above all, and subjected to terrible ordeals that take them to the brink of their capacities and beyond.

“To do that," Patterson says, "our villains must be worthy opponents...The reader has to believe that the bad guy is fascinating enough, clever enough, and bad enough to defeat our hero.” Research, Sullivan learned, is the basis of great villains. It's also the basis of hero, plot, and believability. Sullivan says that Patterson is extremely well read, and his statements about writing are often peppered with references to specific authors, books, or films. In one villainous discussion, Sullivan said Patterson urged me to read the poetry of Louise Glück to get a better feel for a lacerating voice. In another they discussed the novel Perfume.

With Patterson, exposition was severely limited. Sullivan says, "The old adage—show, not tell—was critical, and the element of surprise was paramount. Each chapter in Private Berlin had to deepen a character, advance the plot, or turn the tale on its head. You began every scene with the end in mind; and the end had better blow the reader’s mind or it would be revised or tossed."

Patterson told Sullivan at their first meeting, “What most people who attempt commercial fiction don’t understand is that you have to write the way people talk...You can’t make the prose rigid or dense and expect the normal, busy reader to turn the page, much less stick with you to the very end.”  Sullivan says that Patterson advised him to imagine an entertaining bon vivant in a bar telling our stories in a language that would appeal to every Tom, Dick, and Mary in the place. Humor helped. So did a flare for the dramatic. So did a pared-down style. Sullivan says that Patterson has been criticized for the "short chapters and the ultra-lean prose, but don’t think for a minute that it is without purpose beyond a quick read for a harried reader."

Patterson said to Sullivan, “Most writers will tell you five to 10 things about a character or a setting or an action...Fine for literature. But our approach is to pick the one or two or three that really count and discard the rest. It not only creates pace but it leaves images in the reader’s mind that are concrete and unequivocal.”

In conclusion, Sullivan says, "The sum of this advice was to sacrifice all for the story and the characters. Outlines were trusted navigational charts, yet we were free to sail in other directions as the novel evolved. But if you were going to change something, it had to be a terrific change."

"We’re after terrific, fascinating, and smart,” Patterson said. “We’re after a story that the reader can’t put down and can’t forget when they’re done, the kind people talk about to their friends.”

Don't we all wish we could write something that our readers can't put down? Do you like thrillers? If so, who's your favorite thriller writer?

Thanks for visiting and have a great week!
Posted by Maria McKenzie at 4:52 PM 8 comments:

It's picnic season, a great time for burgers and ribs! This is easy and yummy. Cook these ribs ahead of time and take them to your next picnic.  July Fourth is quickly approaching! But don't just wait for a picnic; this is a great dish any time of year!

This recipe is from Betty Crocker's Slow Cooker Cookbook.  Enjoy!

Spray inside of 5-6 qt. slow cooker with cooking spray.

Cover and cook on low heat setting for 8-9 hours, or until ribs are tender.  Remove ribs from cooker.  drain liquid from cooker and discard.

Pour BBQ sauce into shallow bowl.  Dip ribs into sauce.  Place ribs back in cooker.  Pour any remaining sauce over ribs.  Cover and cook on low heat setting for one hour.

Do you have a picnic favorite?  Thanks for visiting and have a great week!
Posted by Maria McKenzie at 4:40 PM 9 comments:

My new novel, Masquerade: Book Two of the Unchained Trilogy, is now available! Today, in honor of my bad girl protagonist Lavinia, I thought I'd play "Your Novel Starring..."

Lavinia, originally introduced in the first part of the trilogy, Escape, is not the nicest person, and if she'd lived today, most likely would've been diagnosed with Narcissistic personality disorder.  According to Wikipedia, this "is a personality disorder  in which the individual is described as being excessively preoccupied with issues of personal adequacy, power, prestige and vanity. This condition affects one percent of the population. First formulated in 1968, it was historically called megalomania, and is severe egocentrism."

In addition to her megalomania, Lavinia suffers from sibling rivalry issues.  This is seen in Escape when we meet her sister, Olivia, who is kind and sweet.

Although Masquerade is Lavinia's story, Olivia, to Lavinia's dismay, also makes an appearance.  As I wrote the characters, two beautiful sisters of mixed race ancestry, I envisioned Catherine Zeta-Jones as Lavinia and Halle Berry as Olivia. 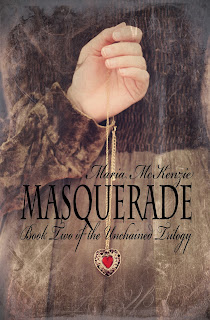 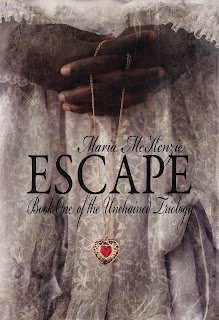 
The maid returned to the car’s dining room, leaving Lavinia alone with Vernon once more.  Soon, she’d need to wake her husband for the evening meal.  But that slipped her mind.  Instead,  Lavinia’s thoughts gravitated back to Hidden Splendor; not the play itself, but the title, which so brilliantly reflected her circumstances.  She’d successfully escaped from California, and was now journeying to New York in search of the hidden splendor that awaited her!
Posted by Maria McKenzie at 1:08 PM 11 comments: