With Halloween quickly approaching, horror movies have been running non-stop on local television channels.  Today, I'll tell you about one that you probably won't see anywhere.  This is an article from "the archives" that originally appeared here back on October 20, 2010. If you missed it the first time around, I hope you'll find it...interesting today... 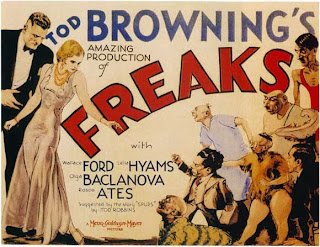 Freaks is a horror movie from 1932 that not everyone has heard of, and not many have seen. Even by today's standards, it's pretty much over the top, and will probably never be shown as a late night movie--even on cable! (Correct me if I'm wrong.)

Scary movies are nothing new, and  have been around since the silent days starting in 1915 with Golem.  Known as "the first monster movie," Golem was based on the Jewish legend of a solidly built clay man sent to save the ghetto, but once his work is done, he runs wild throughout the village.

Another early classic, considered "the granddaddy of all horror films" is The Cabinet of Dr. Caligari (1919), which pits an evil doctor against a hero incarcerated in an insane asylum.  By the end of the film, the audience is unsure of who's really mad and who's sane. 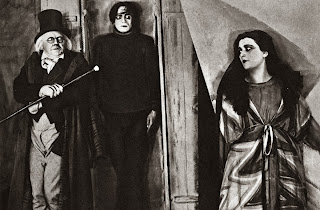 1922's Nosferatu is the first vampire movie that basically plagiarized the Dracula story.  This version presents an inhumane bloodsucker and is much more frightening than any of its motion picture predecessors.

The three above mentioned films were made in Europe.  But Universal Studios in Hollywood made its share of horror films starring Lon Chaney, including The Phantom of the Opera (1923) and The Hunchback of Notre Dame (1925).

But in 1931 Universal pushed the envelope a little further by producing Dracula, based on the stage play by Hamilton Deane and John L. Balderston.  Their work was based on Bram Stoker's Dracula. The film had no comic relief, nor a  trick ending to lessen the elements of the supernatural, so it was an extremely risky project for a Hollywood studio to undertake. American audiences, they feared, might not be receptive to it.

Because of a major publicity campaign, the film opened to full houses, complete with audience members fainting in shock.  Dracula was a hit! 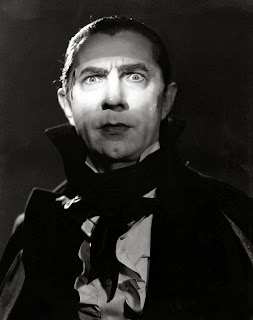 But just how could Metro Goldwyn Mayer Studios jump on the horror movie bandwagon? MGM was the premier studio back in the day, and after the success of Dracula they wanted to create something even "more horrific."

Tod Browning, who'd directed Dracula, was brought to MGM to direct an adaptation of a short story by Tod Robbins called Spurs. The plot is a simple melodrama. A husband finds out his wife wants to kill him so she can run off with his money and her lover. Only this story is set against the backdrop of a circus. The husband is a midget, the wife a Russian acrobat, and her lover, a cruel circus strong man.

The movie was eventually entitled Freaks (remember, there was no political correctness back in the 1930's).  But when conjoined twins, a bearded lady, armless and completely limbless sideshow stars, and many more started arriving on the set, MGM executives started having second thoughts. 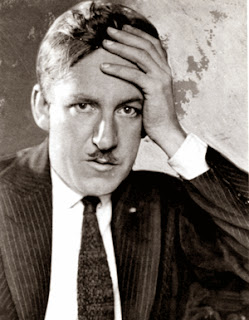 Browning gave each of these performers time on screen to exhibit their unique talents, but when the finished product was screened, the executives were not only shocked, but nauseated by what Browning had filmed. They ordered changes, but even with changes, once released to the public, audiences "freaked out" (sorry, couldn't resist).

To read more about the fate of Freaks and to actually see it, click here:
http://www.thehumanmarvels.com/?p=57.

Have you ever heard of Freaks? Do you think you'll watch it? Thanks for stopping by and have a great week!
Posted by Maria McKenzie at 10:53 AM 9 comments: 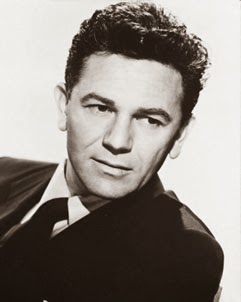 Humphrey Bogart, James Cagney and Edward G. Robinson were all well known actors remembered for their tough guy portrayals in Warner Brother's films of the 1930s and '40s.  Another name to add to that list is John Garfield, although he is little remembered today.

Garfield, an accomplished stage actor, is actually acknowledged as paving the way for Method actors, such as Montgomery Clift, Marlon Brando and James Dean. 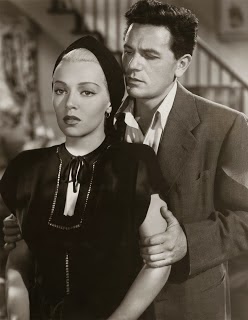 With Lana Turner in The Postman Always Rings Twice, 1946

Garfield's premature death was most likely caused by his blacklisting in Hollywood during the Communist scare. Although he was not a Communist, Garfiled knew some individuals, from his early theater days in New York, that were--including his wife, Roberta Seidman.

Garfield had contracted scarlet fever as a child, and that sickness weakened his heart. He'd suffered two heart attacks prior his testimony before the U.S. Congressional House Committee on Un-American Activities. 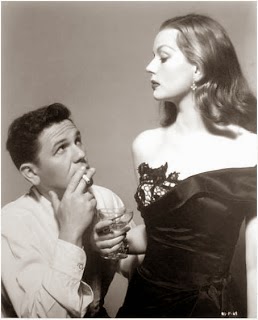 With Hazel Brooks in Body and Soul, 1947

Garfield denied Communist affiliation and refused to "name names." That ended his film career, and eventually his life.  Garfield died in 1952 at age 39, from a heart attack.

The only John Garfield film I've ever seen is The Postman Always Rings Twice, which is very steamy and excellent, by the way.  Have you ever seen any of John Garfield's films?

Thanks for visiting and have a great week!
Posted by Maria McKenzie at 12:09 PM 9 comments:

Cooler weather is finally here, and one of my favorite cool weather meals is chili!  I especially love the ease afforded when it's made in the crock pot. This recipe, from Mabel Hoffman's Crockery Cookery, uses chunks of stew meat instead of ground beef, so if you're looking for something tasty, as well as hearty and satisfying, look no further! Enjoy! 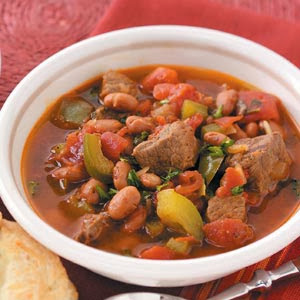 Sprinkle meat with garlic, pepper, salt and chili powder.  Pat spices into meat.  Cut meat into 1/2 inch cubes. Place meat in slow cooker. Cover with onion, bullion granules, tomatoes and chiles.  Cover and cook on LOW 6 to 8 hours or until meat is tender.  Turn control to HIGH. Add cilantro and beans.  Cover and cook on HIGH 20 minutes.  Serve on a bed of rice.  Makes five or six servings.

I'd never had chili with stew meat until I tried this recipe.  I grew up eating chili made with ground beef. What about you, and which do you prefer? I like both!

Thanks for visiting and have a great week!
Posted by Maria McKenzie at 4:13 PM 8 comments:

Show Don't Tell: Can You Explain That? 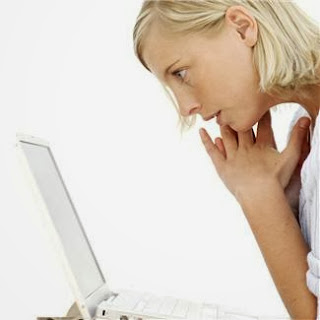 "Show, don't tell." If you're a writer, you've probably heard this as advice from other writers and read about it in craft books many, many times. I was recently asked to explain it to a new writer, but after using a few "for instances", I decided to find something that would do a better job of describing it.

Here's an excellent article by Erin over at Daily Writing Tips.  If you're new to writing, this information will help you clearly understand how to show and not tell! By the way, I just discovered Daily Writing Tips, and it's a great place to find answers for any writing questions you may have!

Anyone who’s ever written a short story or taken a freshman composition course has heard the words “show, don’t tell.”

I know those words can be frustrating. You might not know exactly what “show, don’t tell” means. Or you might believe that you are showing when you’re really telling.

While “telling” can be useful, even necessary, most people don’t realize how vital “showing” is to an effective story, essay, or even a blog post. Showing allows the reader to follow the author into the moment, to see and feel and experience what the author has experienced. Using the proper balance of showing and telling will make your writing more interesting and effective.

I’m glad you asked. Here are some tips that will help make your writing more vivid and alive for your reader.

1. Use dialogue
This is probably one of the first things I talk to my students about when I have them write personal essays. Dialogue allows the reader to experience a scene as if they were there. Instead of telling the reader your mom was angry, they can hear it for themselves:
“Justin Michael,” mom bellowed, “Get in here this instant!”
Dialogue can give your reader a great deal about character, emotion and mood.

2. Use sensory language
In order for readers to fully experience what you’re writing about, they need to be able to see, hear, taste, smell and touch the world around them. Try to use language that incorporates several senses, not just sight.

3. Be descriptive
I’m sure everyone remembers learning to use adjectives and adverbs in elementary school. When we’re told to be more descriptive, it’s easy to go back to those things that we were taught. But being descriptive is more than just inserting a string of descriptive words. It’s carefully choosing the right words and using them sparingly to convey your meaning.
The following example is from a short story I wrote.

Telling: He sits on the couch holding his guitar.

There’s nothing wrong with that sentence. It gives the reader some basic information, but it doesn’t create an image. Compare that sentence with this:

Showing: His eyes are closed, and he’s cradling the guitar in his arms like a lover. It’s as if he’s trying to hold on to something that wants to let go.

The second example takes that basic information and paints a picture with it. It also uses figurative language—in this case, the simile “cradling the guitar in his arms like a lover”—to help create an image.

When using description, it’s important not to overdo it. Otherwise, you can end up with what I call “police blotter” description. For example:
He was tall, with brown hair and blue eyes. He wore a red shirt and jeans, and a brown leather jacket.

4. Be specific, not vague
This is another one I’m constantly reminding my college students about. Frequently, they will turn in essays with vague, fuzzy language. I’m not sure if they think this type of writing sounds more academic, but all it really does is frustrate the reader.


Instead of writing, “I had never felt anything like it before in my entire life,” take the time to try and describe what that feeling was, and then decide how best to convey that feeling to the reader. Your readers will thank you for it.

Hope this information from Daily Writing Tips is useful. If you're a seasoned writer, have you had to explain "show, don't tell" to a novice?  If you're new to writing, have ever had questions about it?

Thanks for visiting and have a great week!
Posted by Maria McKenzie at 12:02 PM 9 comments: