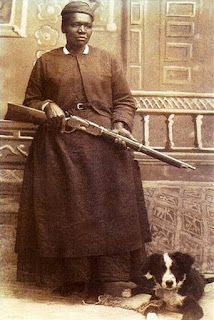 Talk about inspiration for a great character, look no further than Stagecoach Mary Fields! She has certainly inspired me to create a rather vibrant character in a future novel based on her extremely unconventional lifestyle. If you've never heard of her, take a look at what The National Postal Museum says:

Standing six feet tall and powerful, many bandits learned to stay clear of Stagecoach Mary in the American Old West. Stagecoach Mary Fields carried a gun, smoked, drank and had a wicked temper. Mary was the first African American woman to carry mail on a Star Route for the United States Post Office Department.

Mary Fields was born into slavery in either 1832 or 1833; her exact birthday is unknown. Mary's birthplace and other details about her early childhood are also unknown. What is known is that she worked for the Warner family in West Virginia in the years leading up to the Civil War. Mary was emancipated in 1863 or shortly after the Civil War; she then moved from West Virginia and went up the Mississippi River where she worked on steamboats.

Mary ended up in Ohio, specifically Toledo. There, Mary began working at Ursuline Convent of the Sacred Heart. There is debate over how and why Mary ended up working at the convent. Yet, what is known is that Mary’s gruff style was not something that fit into the serene calm that was the convent.

During her time at the convent, Mary washed laundry, bought supplies, managed the kitchen, and grew and maintained the garden and grounds. Mary was known to lose her temper and was quick to yell at anyone who stepped on the grass after she had cut it. 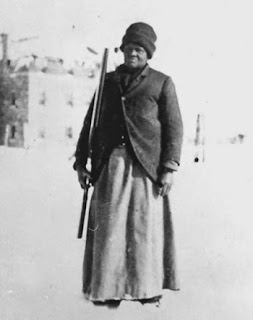 It is unclear why Mary left Toledo. Many sources think that she moved to take care of an ill friend. Mother Amadeus Dunne, who had been Mother Superior in Toledo before moving West, had fallen ill. Mary and Mother Amadeus were known friends. Some records date their friendship all the way back to the Warren family in West Virginia, though this claim is not substantiated.


Once she arrived West, Mary got to work. Mary mainly worked for Saint Peter's Mission near Cascade, Montana where she did many of the jobs she had done before in Toledo. This mission was run by Ursuline nuns and was where Mother Amadeus Dunne resided. Mary performed maintenance and repair work. She also gardened and did the laundry. One major thing that Mary was also in charge of was the locating and delivery of supplies needed for the mission. Yet Mary had no official contract with the mission and nuns; thus, she was free to come and go as she pleased, taking additional work outside the mission.

Mary was unfortunately dismissed from the mission. This was due in part to her crass behavior, unruly temper and penchant for drinking and smoking in saloons with men. The final straw appears to involve an argument in which Mary and another mission janitor, a male, got into a fight and were agitated to the point that both drew guns. While neither ever fired their gun, this incident was enough to make the Bishop of the area demand for the nuns to relieve her duties. Mary moved to neighboring Cascade, Montana, where she tried but failed to open one or more eateries. They were said to have failed due to her giving nature of allowing folks who could not pay to eat for free. Mary also reportedly set up a laundry shop and did other odd jobs to make money. It is around this time that Mary’s drinking, gun toting, and smoking become well known to the townspeople of Cascade.

In 1895, in her early sixties, Mary obtained a contract by the United States Post Office Department to be a Star Route Carrier. A Star Route Carrier was an independent contractor who used a stagecoach to deliver the mail in the harsh weather of northern Montana. Mary was the first African American woman and the second woman to receive a Star Route contract from the United States Post Office Department. This contract was secured with the help of the Ursuline nuns. The nuns wished to look out for Mary as they felt connected with her. This was because they did not wish to see her go as the nuns heavily relied on Mary for work done around the mission.

Mary built a reputation of being fearless while working as a mail carrier. Mary’s job was not only to deliver the mail but to also protect the mail from bandits, thieves, wolves and the weather as well. Mary gained her nickname “Stagecoach Mary” due to her use of a stagecoach as a method of transportation to deliver the mail. Mary was also known for the guns she carried. During the time that Mary was delivering the mail, she was known to carry both a rifle and a revolver.
Mary spent eight years delivering the mail as a Star Route Carrier. During this time, Mary became beloved by the locals of Cascade, Montana for her fearlessness and generosity, as well as for her kindness to children. Mary retired from being a Star Route Carrier in the early 20th century. After her retirement, Mary settled into life in Cascade, Montana.

Had you ever heard of Stagecoach Mary Fields? Thanks for visiting and have a great week!
Posted by Maria McKenzie at 9:25 AM No comments:

Who's Your Favorite, Kelly or Astaire?

I love the old Hollywood musicals and I enjoy the dance numbers the best. I'm a big fan of both Gene Kelly and Fred Astaire! Although Astaire appears more graceful and Kelly more athletic, I don't think I could ever say I liked one more than the other because they were both great. For a real opinion on their dancing, check this out from dancer Cyd Charisse's autobiography The Two of Us:

"As one of the handful of girls who worked with both of those dance geniuses, I think I can give an honest comparison. In my opinion, Kelly is the more inventive choreographer of the two. Astaire, with Hermes Pan's help, creates fabulous numbers – for himself and his partner. But Kelly can create an entire number for somebody else ...
I think, however, that Astaire's coordination is better than Kelly's ... his sense of rhythm is uncanny. Kelly, on the other hand, is the stronger of the two. When he lifts you, he lifts you! ... To sum it up, I'd say they were the two greatest dancing personalities who were ever on screen. But it's like comparing apples and oranges. They're both delicious."
Delicious is a great way to put it! Who do you like best, Kelly or Astaire?

Thanks for visiting and have a great week!
Posted by Maria McKenzie at 1:55 PM 2 comments: 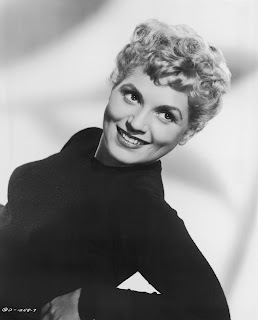 This spirited, intelligent actress of stage and screen played variations of the squeaky-voiced 'dumb blonde' role in a number of breezy comedies of the 1940s and 50s. Under her own name, Judith Tuvim, she formed a comedy troupe called "The Revuers," with Betty Comden and Adolph Green. This led to bits in the films "Winged Victory" and "Greenwich Village" (both 1944) and "Something for the Boys" (1945). But it took two Broadway shows, "Kiss Them for Me" and, notably, as the intellectually ambitious moll in "Born Yesterday," to make the newly-renamed Judy Holliday a star.