Since so many of us are wearing mandated masks in public these days due to COVID-19, I thought I'd re-post this article I wrote back in February of 2018.

Hubby found some interesting information yesterday and suggested that I use it for a blog post. I thought this was a fascinating topic, and only recently learned about myself (like literally last week in the book I'm reading White Like Her). So, thanks to Hubby, here's an article from Royal Tours of New Orleans that explains just what the tignon laws of Louisiana were:

The tignon was the mandatory headwear for Black Creole women in Louisiana during the Spanish colonial period, and the style was adopted throughout the Caribbean island communities as well. This headdress was required by Louisiana laws in 1785. Called the Tignon Laws, they prescribed appropriate public dress for females of color in colonial society, where women of color and some white women tried to outdo each other in beauty, dress, ostentation and manners.
Beginning in the 1800s, tignon was a local New Orleans word for the headwrap, a variation on the French word, chignon which refers to a smooth knot or twist or arrangement of hair that is worn at the nape of the neck.
According to the Code Noir, a mother’s slave condition passed to her newborn infant.  But, due to the lack of White women in early New Orleans, it was common for White men to take a woman of color as a mistress.  Many but not all of the children born from these relationships were free.  The children would be classified as mulatto, quadroon, or octoroon according to the fraction of Black blood in the child.  With so many quadroons and octoroons in the community, it was occasionally difficult to distinguish a free or slave Black woman from a White woman.
When Spain acquired Louisiana in 1763, the concept of coartación was introduced which acknowledged the right of slaves to purchase their freedom. The policy of self-purchase originated in the Spanish perception of slavery as an unnatural human condition.  This method became a popular means for enslaved Blacks to gain their freedom.
By the time of the Louisiana Purchase of 1803, New Orleans free blacks constituted nearly 20% of the urban population while enslaved Africans and African Americans represented nearly 38% of the city’s residents. But, even years before, the increasing assertiveness of black New Orleanians and the growing numbers of free blacks alarmed Spanish officials. The then Spanish Governor attempted to restrict black mobility by suppressing free black assemblies and banning concubinage.
In an effort to maintain class distinctions in his Spanish colony at the beginning of his term, Governor Esteban Rodriguez Miró (1785 – 1791) decreed that female gens de couleur, slave or free, should cover their heads with a knotted headdress and refrain from “excessive attention to dress.”  Miró criticized black women for their “idleness,” “incontinence,” and “libertinism” and demanded that they renounce their “mode of living.”
In 1786, while Louisiana was a Spanish colony, the governor forbade “females of color … to wear plumes or jewelry”; this law specifically required “their hair bound in a kerchief.”  But the women, who were targets of this decree, were inventive & imaginative with years of practice. They decorated their mandated tignons, made of the finest textiles, with jewels, ribbons, & feathers to once again outshine their white counterparts and defy the law without actually breaking it.
Consequently, Miró’s decree had a somewhat different effect as what was intended as a means of controlling and identifying women gens de couleur became instead a fashion statement that remains to this day.
Had you ever heard of tignon laws? Thanks for visiting and have a great week!
Posted by Maria McKenzie at 3:07 PM 2 comments: 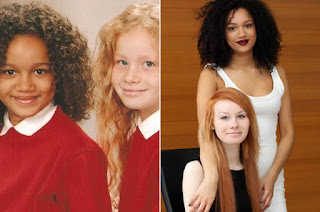 I got a kick out of this story when I first heard about it, and when I told my kids, they had a hard time believing it. Fun story! Here it is reprinted from The New York Post.
There’s a set of biracial twins in the UK who are turning heads because one is black and the other is white.
Born in 1997 to a white father and a half-Jamaican mother, the sisters have grown accustomed to getting mistaken for being just friends — and they have even had to produce their birth certificates in order to prove they are in fact related, Barcroft Media reports.

“No one ever believes we are twins because I am white and Maria is black,” Lucy explained. “Even when we dress alike, we still don’t even look like sisters, let alone twins.”
After giving birth naturally, the twins’ mother, Donna Douglas, did a double-take as she looked at her daughters for the very first time.
“It was such a shock for her because obviously things like skin color don’t show up on scans before birth,” Lucy said. “So she had no idea that we were so different. When the midwife handed us both to her, she was just speechless.”
And when it comes to the girls’ personalities, they are nearly as different as their looks.
Lucy, who has red hair and a very fair complexion, studies art and design at Gloucester College, according to Barcroft.

Maria, who has brown hair with a caramel complexion, studies law and psychology at Cheltenham College. They have three siblings, who all have mixed skin color.
“All our older brothers and sisters have a skin color which is in between Maria and I,” Lucy said. “We are at opposite ends of the spectrum and they are all somewhere in between.”
Lucy says one of the great things about having a twin who looks completely different is that people don’t mistake them for one another.
“We were in the same class at infant school, but no one ever had a problem telling us apart,” she explained. “Most twins look like two peas in a pod — but Maria and I couldn’t look more different if we tried. We don’t even look like we have the same parents, let alone having been born at the same time."

Were you familiar with this story? Thanks for visiting and have a great week!

Posted by Maria McKenzie at 3:50 PM No comments:

Posted by Maria McKenzie at 2:01 PM No comments: