Last week I posted about Olivia de Havilland and her onscreen relationship with dashing Errol Flynn in the eight swashbuckling films they made together during the late 1930's and early '40's.
Although they portrayed romantic couples onscreen, a real-life love story never blossomed between them.
Flynn was married to French actress Lili Damita while he and Miss de Havilland were making pictures together. However, if he hadn't been, things probably would have turned out differently between them.
Both actors admit that they did have feelings for each other and that the chemistry was there. In doing a little research last week, I found pictures of Flynn with his wife, and others with him and Miss de Havilland in candid shots.

Take a look at the body language and tell me who he looks happier with.
Thanks for visiting and have a great week!

Posted by Maria McKenzie at 5:31 AM 8 comments:

No Wicked Ways With Her 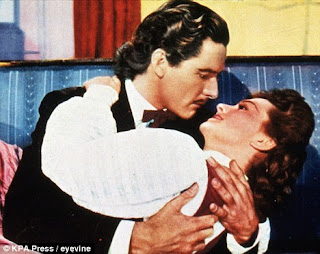 I just realized that Olivia de Havilland, the only surviving cast member of the 1939 classic movie Gone With the Wind (she played Melanie), recently turned 100. I looked her up on Wikipedia and learned an interesting tidbit. She made eight films with Australian heart-throb Errol Flynn, but despite their many pairings, fireworks between them never ignited. Here's why: 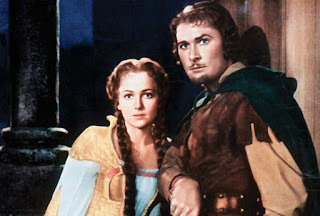 Thanks for visiting and have a great week!
Posted by Maria McKenzie at 5:42 AM 6 comments: 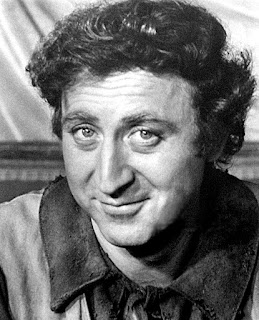 I was sad to learn of Gene Wilder's passing back on August 29. Whereas my husband remembers him for his portrayal of Willy Wonka, I remember him for his comedy.

When I was fourteen years old, I saw the movie Silver Streak. It was PG so I must have seen it with my parents. For the longest time, I remember it being one of the funniest movies I'd ever seen. It made such an impression on me as being funny that, nearly four decades later, I brought it home from the library for my kids to watch.

Okay, needless to say, it wasn't nearly as funny as I remember, my kids thought it was stupid, and all the sexual innuendo that went completely over my head at age fourteen, my teenagers caught! They asked me more than once, "And you really thought this would be appropriate for us to watch?"

Kids are different nowadays and I'm older, but there's no denying that Gene Wilder and Richard Pryor were quite the comic duo! They made four films together, Silver Streak, Stir Crazy, See No Evil, Hear No Evil and Anther You. Silver Streak is the only one I've seen, and my all-time favorite scene from that movie is the shoe polish scene. That's where I laughed the most when I saw the movie as a kid.  Check out the excerpt below from Washington.post.com as Gene Wilder discusses his comic relationship with Pryor, as well as that infamous shoe polish scene!


Pryor “taught me how to improvise on camera,” Wilder said in 2005, a lesson that began on the first day of filming for “Silver Streak.”
“He said his first line, I say my first line, then this other line comes out of him,” Wilder recalled in a 2007 interview. “I had no idea where it came from. But I didn’t question it, I just responded naturally. I didn’t try to think of a clever line. … A great death trap for actors if you’re improvising is you say, ‘I’ll think of one that’s even funnier than that, or more clever than that.’ ”
Pryor would return to the script, and so would Wilder, and then Pryor would go off-script again and Wilder reacted with what made sense, "Everything we did together was like that," Wilder said. 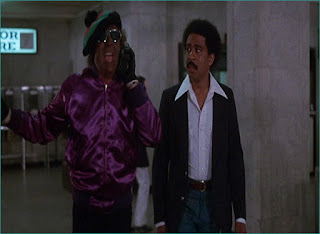 By their third film, Wilder said in a 1989 interview, “we just get comfortable in the situation, or uncomfortable as it may be, and react to each other.” It just so happened people laughed at the result, Wilder added.

In one iconic scene, Wilder’s face is covered in shoe polish in an attempt to disguise himself as black. He’s listening to music, trying to jive-talk and, as it was initially written, a white man enters and thinks Wilder is black. Richard Pryor performing in 1977.
“It was the one scene that I was the most worried about, and I thought, well, if Richard doesn’t mind my putting on the shoe polish in order to pass as black, then it must be okay because he’s the teacher here,” Wilder recalled in 2005.
During the read-through, Pryor became “more and more morose,” Wilder recalled, and Pryor told him, “I’m going to hurt a lot of black people doing this scene.”
Pryor later explained the problem to Wilder: “You’re in there in the bathroom, in the men’s room, and you’re putting shoe polish on your face, and a white man comes in and he doesn’t think that it’s anything unusual because that’s how n–––––– behave, right?'”
Wilder asked Pryor to explain how the scene should go: “It should be a black man who comes in, who sees what you’re doing, knows right away that you’re white and doing this because you must be in some kind of trouble.’ And he says, ‘I don’t what your trouble is mister, but you got to keep with the music.’ “
The pair called the director and the scene was changed.

I think my kids did laugh at that scene and we could agree that that part of the movie really was funny! Are you a Gene Wilder fan? If so, what's your favorite Gene Wilder movie?

Thanks for visiting and have a great week!
Posted by Maria McKenzie at 3:00 PM 4 comments: 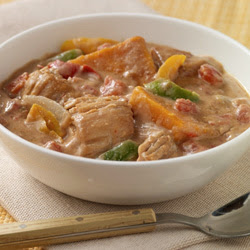 I love African Chicken Stew! It's tasty and healthy. The combination of chicken, peanut butter and sweet potatoes is absolutely amazing! However, the recipe I usually use is made on top of the stove and takes a bit longer to prepare than I'd like. Searching the Internet, I found this one at Ready Set Eat. It's for the crock pot, my all -time favorite appliance! A little bit of stove-top prep is involved, but  not nearly as much as my other recipe. Enjoy!

Posted by Maria McKenzie at 6:55 AM 4 comments: