An Interview with Jennette Marie Powell

I am pleased to have talented author Jennette Marie Powell with me today!  She’ll be sharing what inspires her work, as well as some great advice about self-publishing.

Jennette has written the exciting time travel adventures Time’s Enemy and Time’s Fugitive.  These are books one and two of her Saturn Society Series, and they’ll appeal to anyone who loves science fiction, romance and history!

Jennette is an awesome storyteller and meticulous researcher. As I read Time's Enemy, I was thoroughly entertained by the story, and fascinated by the history!

I met Jennette through OVRWA and had the opportunity to listen to her present some great information as part of a self-publishing panel. I thought what I learned from her would be well worth sharing!

1. Before jumping into your recent works and info on self-publishing, I’d like to know how long you’ve been writing.
I wrote my first story when I was seven, about my best friend and her family! I think it filled maybe half of one of those note card-sized spiral notebooks. :)  I also wrote in high school and in college – I earned a minor in Creative Writing – but started really writing – as in, for publication, in 1999.

2. Time’s Enemy is a sci-fi romance with historical elements.  It takes place in Dayton, Ohio and you’ve incorporated some very interesting Dayton history.  Are you a native of Dayton, and is that why you placed the story there?
I’ve lived in the Dayton area all my life, so yes, that had something to do with it! I originally was going to set it elsewhere – maybe Columbus – because I didn’t think I could sell a story set in Dayton. But my characters had other ideas, so I figured what the heck! Doing the research was what brought about my love of local history. 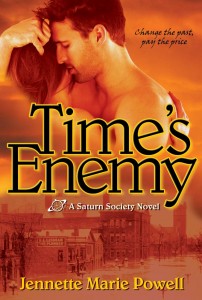 An unwilling initiate in a secret society of time travelers breaks its highest law by changing the past, risking death and betrayal by the woman he loves.

3. Unwilling time traveler Tony Solomon is back in Time’s Fugitive. Can we expect more volumes in the Saturn Society Series?
I’m currently working on a short story that’s a prequel to the series. As for more novels – maybe! Right now, I have so many ideas clamoring to be written, and already planned for 2013. But I do love the SS novels, and can certainly see another one – maybe more – down the road. I left a few doors open just so I could do that!

4. Your premise of the protagonist being a reluctant time traveler, who then becomes willing, only in order to manipulate the past for love, is a fascinating one! What inspired that idea?
It pretty much developed organically from the characters. Time’s Enemy was the novel where I learned my process—what works for me, and what doesn’t. I tried writing without an outline at first, and while I basically ended up with 600 pages of mostly rambling with no end in sight, I did learn a lot about my characters and had fun. Reining it in with a plan saved it and gave me a place to end the first book, and ended up working out for the best. My characters still surprise me, but mostly do it in the outlining stage now. 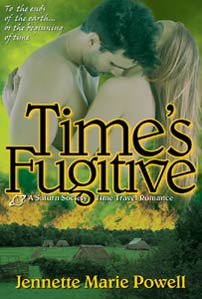 Framed for murder, an unwilling time traveler will do anything to protect the woman he doesn’t want to love and their unborn child.  But when they escape much farther into the past than planned, their troubles are only beginning—and secrets can get them killed.

5. Do you have another series in the works?
I actually have a couple others, both with just one book. This is because in traditional publishing, we never know if we’ll sell the series, so the common wisdom says to write one book that can stand alone, and if it sells and the publisher asks for others, then write the others. One is a historical science fiction romance book set in Dayton in 1905, the other is my next release.

6. What is your next release and when is it due out?
My next release is Hangar 18: Legacy, a contemporary science fiction military romance with a suspense element. It’s set on Wright Patterson Air Force Base – where according to legend, alien bodies and spacecraft from the Roswell incident was taken. It’s about a psychic AF researcher and the skeptical developer of mind-control software who must team up to rescue an imprisoned extraterrestrial thought dead for decades. I haven’t set a specific date for release, but I’m planning to have it out sometime this fall.

7. Tell us about your self-publishing journey. What motivated you to take that leap?
Once self-publishing became a viable means of distribution and reaching readers, it seemed the perfect choice. After years of rejection—most of which were on the lines of “your writing’s good, but I can’t sell this—I realized that what I was writing was too niche for a big publishing company to take a chance on. But with self-publishing, a book has all the time it needs to find an  audience, and the author can still earn a nice bit of money over the long haul—while offering great stories to readers for reasonable prices.

8. Tell us about your background, and how that’s helped you in self publishing.
My college degree, and the first ten years of my professional life, were spent in graphic design. When the Internet started to really take off, I knew that was the future, so I transitioned into web design, and eventually programming. Both have served me well, as I design my own book covers and book interiors, and format my ebooks! This was another reason why self-publishing was a no-brainer for me. :)

9. For self-published print copies, would you share your opinion on Lightning Source and Createspace, and let us know what’s the most advantageous choice for techies and non-techies.
There’s potential for more money with Lightning Source, as they allow authors to set the retailer’s cut as low as 20%. CreateSpace’s retailer cuts are fixed at 40% for sales through Amazon, and 60% for sales through other retailers. But Lightning Source’s pricing advantage comes at a cost: $75 in setup fees, you must supply your own ISBN, and their technical specifications are more exacting, which can cost $40 each time a change (or a mistake) is made. I typically recommend Lightning Source if you are a graphic designer experienced in print, or are working with a cover artist who is. Otherwise, CreateSpace is much easier, much cheaper, and the quality and print fees for author copies are comparable.

10. What advice do you have for anyone thinking about self-publishing?
Learn your craft first! Odds are, your first book won’t be ready for publication, even if you think it is. I know mine wasn’t, even though it was contracted by an e-publisher! I wrote six books before I published myself. The sixth was actually a complete rewrite of that first book, so even though the first one may not be publishable when you first write it, that’s not to say it isn’t later. But either way, always keep learning and improving your craft!

Jennette, thanks so much for joining me today and sharing some great information with us! To visit Jennette, go to www.jenpowell.com. Time’s Enemy and Time’s Fugitive are now available through Amazon, Barnes and Noble and Smashwords. Click here to order and read more about Jennette’s books!

Now it's your turn, what inspires your writing? Also, are you self published or considering self-publishing? If so, are you technical or non-technical? What's been your experience?

Thanks for visiting!
Posted by Maria McKenzie at 10:20 AM

Hi Maria, hi Jeannette! Thanks for an insightful interview into Jeannette's publishing journey and success and all the best with Time's Enemy and Fugitive!

I love the bit about 'pantsing' the story as a great way to get to know your characters but reigning them all in with an outline! I tend to free flow when writing and without any focus the story just ends up as garbage but I do tend to flesh out my characters more!

Thanks, Old Kitty! "pantsing" was fun, but I find I use my writing time much more effectively now that I outline.

Thanks a bunch for having me, Maria!

@Old Kitty: Pantsing is great for developing all that stuff beneath the surface that readers don't need to know about!

@Jennette: You're welcome! So glad to have you share your insight and expertise!

This was a great interview with excellent suggestions.

Shelly, glad you enjoyed the interview!

I'm always blown away by how much I don't know about publishing...by any means. I'm so grateful to have ya'll to lead the way and keep us noobs informed!
And I think Dayton's a great place to set anything sci-fi...after all, weren't the Wright brothers actually aliens?????

Great interview, Maria and Jennette! Sounds like you've got some good ideas for future books!