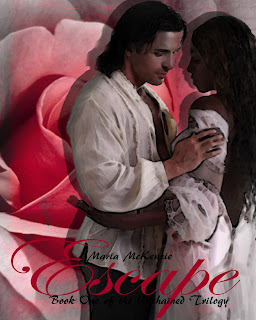 If you like historical fiction, please consider adding Escape to your reading list! By the way, what are you reading now? I just started Nancy Taylor Rosenberg's Buried Evidence and Jane Smiley's Private Life.  Thanks for visiting!
Posted by Maria McKenzie at 5:14 PM

Congratulations Maria. I'm sure it's a great read and I hope to read it someday!

My goodness - Lori is one feisty character!! What a strong stunning excerpt! Thank you for sharing and HUGE CONGRATULATIONS!! Yay! Take care
x

Looking forward to this - it's definitely on my reading list!

Right now, I'm reading Enza, by Kristy K. James, also historical fiction. It's about a small town in 1918 and people who are affected by the Spanish Flu epidemic. Really good!

@Old Kitty: Thanks, Old Kitty! I can only imagine being as feisty as Lori:).

@William: Thanks, William! Glad you enjoyed the excerpt:).

Will it be available in PDF sometime?. Still avoiding amazon and BnN's NOOK is not available across the pond.