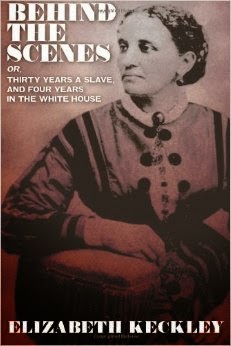 I ran across an interesting slave narrative recently and thought I'd share it today. Behind the Scenes, or, Thirty Years a Slave, And Four Years in the White House was written by Elizabeth Keckley.  She was best known as the personal seamstress and confidante of First Lady Mary Todd Lincoln. Keckley was born a slave in 1818, but purchased her freedom in 1860 and then moved to Washington. She created an independent business in the capital, and her clients included the wives of the government elite.

According to Biography.com:
Keckley not only became Mrs. Lincoln's dressmaker, she was also the first lady's personal dresser and closest companion. She was a White House habitué during the pivotal years of the Abraham Lincoln presidency; the two ladies travelled together, with Keckley present for the Gettysburg address, and they raised money together for the Civil War effort.
Keckley son's died in the war in August 1861, but her mourning was cut short to comfort Mrs. Lincoln, who lost her own son to typhoid the following February. Keckley was also there to provide support following the president's assassination and Mrs. Lincoln's transition out of the White House.
Keckley decided to write her memoir in part to salvage the former first lady's reputation after the war. However, the publication of Behind the Scenes: Or, Thirty Years as a Slave and Four Years in the White House in 1868 had the opposite effect; feeling betrayed by the revelations in the book, Mrs. Lincoln cut off contact with the woman she once called her closest friend.
I just recently learned about Elizabeth Keckley. Were you at all familiar with her? Thanks for visiting and have a great week!
Posted by Maria McKenzie at 5:41 AM

Email ThisBlogThis!Share to TwitterShare to FacebookShare to Pinterest
Labels: Behind the Scenes, Elizabeth Keckley, Slave Narratives, Thirty Years a Slave

What an amazing story! Poor Ms Keckley wrote her memoirs with the best of intentions but had the opposite effect instead! Oh dear! Absolutely fascinating stuff! Thanks for this Maria! Take care
x

I was not familiar with Ms. Keckley. What an interesting story - and how sad how it ended.

Oh, yes, I was quite familiar with her.

Once again, Maria, I've learned something new from your blog! Thank you!

@Old Kitty: I know, so sad. Bad things sometime happen as a result of good intentions.

@Jennette: This is an interesting and sad story. I first heard about her in the movie Killing Lincoln, based on Bill O'Reilly's book by the same name.

@William: Being Canadian, you always surprise me with all the American history you know!

@Norma: Glad you enjoyed it!

I've never heard of her. Too bad their friendship went sour over her book.

I'll have to ask my husband about Keckley--he enjoys learning factoids about Lincoln.

Then I'd be willing to bet he knows about her;)!