From Cad to Cadaver: Now Available! 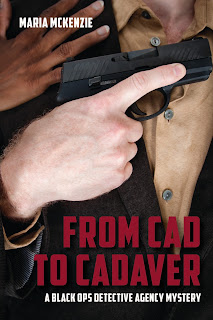 My newest novel, From Cad To Cadaver, is now available at Amazon!  It's the first in a new mystery series I've created called Black Ops Detective Agency. This is also an IR clean romance that I classify as African American Hysterical, NOT Historical.

This novel is a contemporary mystery, which is a change from the historical fiction I write. It's a lighter read with lots if humor and features ex-cop and former FBI agent Tracy Black, along with ex-Navy SEAL and all around tough guy Adam Slade.

She's black, he's white, but the situations they stumble into are hardly just black and white!

Check out the synopsis below and keep reading for a brief excerpt!

Ex-cop and former FBI agent Tracy Black is plagued by serious trust issues stemming from two horrific failed relationships. Leaving behind the memory of one bad relationship, along with the excitement and high voltage sizzle of Atlanta, Tracy moves back to her hometown to pursue a career as a private investigator. Cincinnati’s atmosphere is low-key and uncharged, and unfortunately not great for Tracy’s new business. Yet her sister knows someone who can help. In addition to a chiseled set of GQ cheekbones, all around tough guy and ex-Navy SEAL Adam Slade is tall, built and hot. On the mend from a broken engagement, Adam, who works as a PI and security consultant, is eager to meet Tracy. With his connections and their combined investigative skills, he thinks they’d make a great team—and that picture he saw of her in a sexy sweater wasn’t bad either. Tracy, however, is convinced she can get along fine without Adam’s help, especially since their first meeting left her utterly humiliated. Eventually, Tracy is willing to lend a hand when Adam offers her a chance to work alongside him in a lucrative out-of-state gig. Once back home, Tracy is convinced that things are looking up, until she is accused of murder. What will it take to get her off the hook? As Adam puts his life on the line for her, will he die, or at the very least die laughing, in a series of mishaps to help Tracy clear her name?

Chapter 1
“Traceee-babeee, you are one hot mama!” Dr. Terrance Jackson says to me.
But how can I be a baby and a mama at the same time without literally being a “baby mama?” Which I am not! Which brings me to another question: Why did I agree to go out with this clown in the first place?  Oh, yeah, that’s easy—I have no life.
“That little black dress,” Terrance goes on, “hot, baby; looks like it’s painted on in high gloss!”
Okay, so my dress is a little form fitting, but I wouldn’t go as far as to say it looks painted on.
As Terrance’s wolf eyes continue to rove over me, I say, with a pronounced lack of luster, “You don’t look half bad yourself.” And actually, he doesn’t.  He sports a simple black tux with black bow tie on his weasel-thin frame.
“Hey, you like this?” Terrance sweeps his hands over his tux. “Vera Wang, baby.  It takes a woman to dress a man!  Tracy-baby, before we go, I need to ask a favor.”
“Anything, if you’ll stop calling me ‘Tracy-baby.’ ”
He laughs.  “You’re a funny one—no, you’re unique!  There’s only one Tracy Black.”
“Not if you look in The White Pages.”
“Seriously, Tracy-baby, here’s the favor:  Don’t tell anyone you’re ex-FBI.  All my partners are gonna be seated at our table tonight, and I told them I’d be bringing the real deal—a real FBI agent.”
I’m speechless. At one time, I was a real-life agent.
Terrance has just arrived at my apartment, and this evening he’s taking me to a black tie gala at Queen City University Hospital where he works as an orthopedist.  The guest of honor is a Saudi sheik whose son attends the university.  After an automobile accident six months ago, the son had life-saving surgery at the university’s hospital.  To show his gratitude, said sheik donated like a gazillion dollars for a new medical research facility.
“It’ll just be more exciting that way,” Terrance continues, “you know with our special Saudi guest and his entourage.  I thought it’d be fun to have people think I’m bringing along a spy just to keep an eye on things, you know Arabs—terrorists.” He laughs. “My brother’s gonna be there too.  He’s the only one who knows you’re not still FBI, but I told him mum’s the word on that.”
Disgusted, I cross my arms and sigh. “Terrance, I could get arrested for impersonating an agent.”
“I’m not asking you to impersonate one, just don’t tell anyone you resigned from the Bureau.”  He gives me that smarmy smile of his, then offers the crook of his arm and escorts me to his silver Saab, a Swedish car that has some type of mysterious prestige.  Any time he passes another guy in one, they give each other a signal that implies how special they are.
Terrance once told me, “Every black man working has a BMW, get it? Black Man Working. BMW.  But only a fortunate few have discovered the wonder of the Saab.”  Whatever.
Once at his car, he opens the door for me, saying, “Our carriage awaits.” He bows, then makes a sweeping motion with his arm, like he’s Prince Charming or something. Right.
And the evening is off to a lovely start.  NOT!

Please be sure to check out From Cad to Cadaver at Amazon.com!

Thanks for visiting and have a great week!
Posted by Maria McKenzie at 11:16 AM

Congrats on the new release! It sounds really good--and funny. Going to check it out!

Tracy baby...LOL! Congrats to you.