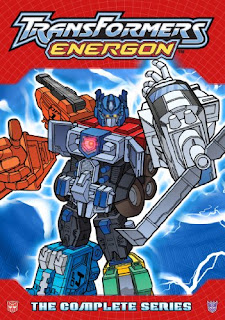 Okay, I have a confession to make. I love Transformers. Don't get me wrong, not the movies, with the exception of the first one (Transformers, released in 2007), but the animated TV series Transformers: Energon. Apparently the Transformers animated series has a very long history dating back to the 1980s, which I am not familiar with. Energon, however, I know quite well and it was a pretty awesome show!

The cartoon used to come on one of the cable networks at 6:30 a.m. and it was a great way to get my kids out of bed for school in the mornings. "Come on," I'd say, "get up and eat your breakfast, so you can watch Transformers before we go to school." I'd watch too. And talk about amazing toys that could transform from vehicles to robots! They were great, and pretty fun to play with too. All I played with as a kid were Barbie dolls. Too bad Transformers weren't around back then. I'm not sure how many Transformers we purchased for our kids, but we accumulated quite an army!

I remember being sooooo excited when the first Transformers movie came out. It was phenomenal (I mean, if you like lots of action and explosions)! The kids sat wide-eyed through the whole thing, and so did I.  The best part was watching the characters transform; very cool computer animation was used.  The second 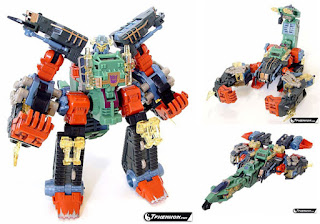 movie was okay, and the third was, well, less than okay. I didn't even realize a fourth one had been released, and then yesterday I read about number five that's out now. The review I read said the worst part about it was that it left you knowing that yet another sequel was still to come. Enough already--at least in my humble opinion. But I realize that as long as the franchise keeps making money, the movies will keep being produced.

They could have stopped after one, but I feel that way about most films that have sequels. Have you ever seen a sequel that was better than the original?

Thanks for visiting and have great week!
Posted by Maria McKenzie at 1:21 PM

Email ThisBlogThis!Share to TwitterShare to FacebookShare to Pinterest
Labels: Transformers

I just wish they'd stop making these, but that "director" behind them can't take a hint and hold his breath for an hour.

As long as the money keeps rolling in they won't go away;).

Maria--I would never have guessed!

As for the movies, I think they've finally crossed the line into the Land of Too Many. They're calling #5 a flop.

@Norma: Believe it or not;). TRANSFORM! To this day, whenever I see a helicopter with the kids I say, "Look, it's Cyclonus!"

Yes, 5 is a flop. I don't think my kids will watch it even if I bring it home on DVD from the library.