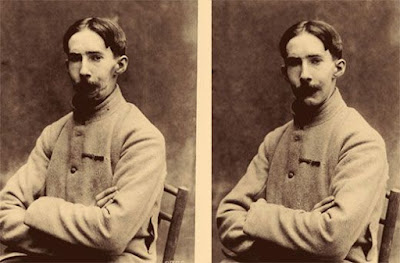 Not long ago, I stumbled upon a topic that broke my heart.  Halloween is coming up and lots of kids will be wearing masks as a part of their costumes. I remember those days and loved disguising myself behind a mask.

But what if you actually needed a mask to be seen in public, or just by your family and friends?  That’s the dilemma several soldiers from WW I faced as they returned from the trenches.

WW I took the lives of more than 9 million soldiers, but many returned home blinded or with missing limbs.  Then there were those who suffered the only injury in the UK that provided a full pension, facial disfigurement.

Medicine had advanced by the time of the outbreak of WW I.  Lives could be saved, but saving faces destroyed by trench warfare was a difficult undertaking. 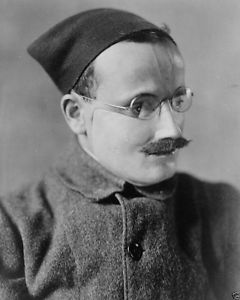 According to Olga Khazan in The Atlantic, "The iconic trenches of World War I were themselves an "unforeseen enemy.” The unceasing machine-gun fire led to a fate that was, at the time, almost as bad as death. Western front soldiers who popped their heads above their trenches would come back down with a nose, jaw, or even an entire face missing."

The most advanced cosmetic surgery during this time was fixing a cleft lip. So doctors were faced with severe challenges.

There were some crude successes of facial reconstruction, but the task of repairing a broken face beyond repair was left the creation of a mask to cover the injuries. 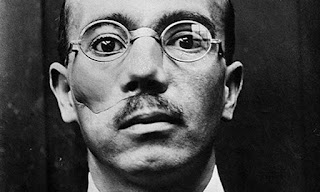 There was a woman sculptor named Anna Coleman Ladd that made some of the best masks. She, along with artist Francis Derwent Wood, helped hundreds of disfigured veterans re-adjust to society.
Ladd would take plaster casts of a soldier's face and try to re-create an identical cheekbone or eye-socket on the opposite side. Then, using copper, she’d create a full or partial mask.  Then it would be painted to match the skin. The entire mask weighed only about half a pound, and was either hung from a set spectacles or tied with strings to the veteran’s head.

In France alone, 3000 soldiers would have required these masks, but Ladd only made 185. 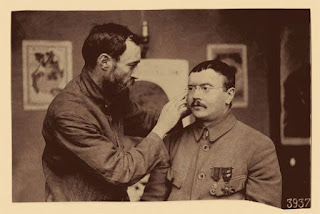 The masks were not long lasting and would fall apart after only a few years.  But it’s assumed that the men who wore them, wore them to the grave, and none of those masks are in existence today.

There are some excellent articles on the prosthetic masks of WW I (such as this one from Smithsonian), but the photographs included on the subject are not for the faint of heart.  So if you should do some looking, just be prepared.

Is this something you'd ever heard of? Thanks for visiting and have a great week!

Posted by Maria McKenzie at 5:29 AM

It appears you've got a spammer at work.

I have heard of this. It's touched on at our War Museum's permanent galleries about the need, particularly in the First World War, for prosthetics for those whose faces had been severely damaged.

It's a sad and fascinating topic. I wasn't aware of it at all. Maybe if we had a War Museum where I live I would have known about it.