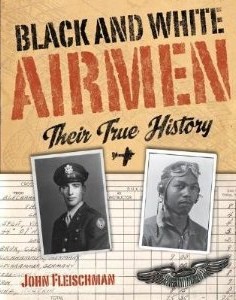 Right upon the heels of learning that film producer George Lucas is involved in an interracial relationship with Good Morning America Financial Consultant Mellody Hobson, I also found out that George Lucas produced the movie Red Tails!

Because Red Tails, depicting the story of the heroic Tuskegee (African American) Airmen, was largely cast with African Americans, George Lucas had to finance it with his own money. Other producers feared low movie attendance since no heavy duty white roles were present to attract white audiences.

I wonder if Ms. Hobson put the bug in George Lucas's ear to do the movie in the first place!

That motion picture brought to mind a book I wanted to share that I happened upon by accident one day while at the library.  It's a kid's book (6th grade and up), but a fascinating account for adults to enjoy, as well.

Did you see Red Tails? If so, what did you think?

Thanks for visiting!
Posted by Maria McKenzie at 3:52 PM