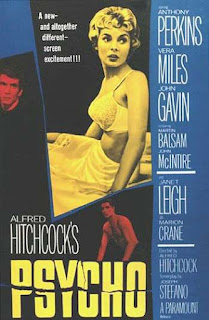 I'm on a roll with creepy movies this month, and one of the scariest is Psycho. The infamous shower scene is one of the most frightening around. After seeing it, many people didn't take a shower for months, or even years!
I mentioned last week that I don't like blood and gore slasher movies. But even though there's lots of slashing in this particular scene, and even some blood, it's more implied than visual, which makes the scene so masterful!

Psycho was directed by Alfred Hitchcock and starred Janet Leigh, who usually played a good girl, but in this film was cast as wayward secretary Marion Crane. In a surprising twist, she's killed off in the first 45 minutes of the film. Her murderer is cross-dressing, psychotic hotel manager Norman Bates played by Anthony Perkins. Where is Marion killed? In the shower, of course.  The scene took a week to film and I found some fascinating facts about it at History.com. Take a look at some of them below: 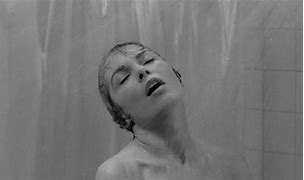 Psycho became Hitchcock’s most successful film at the time—its box-office take, $32 million, was the second best of 1960, after Spartacus. But it was made despite much resistance. Paramount, the studio that had produced several of the director’s 1950s successes, refused to bankroll it. So Hitchcock financed its budget himself, against the advice of his own producers. The film also rattled the censors who executed Hollywood’s slackening Motion Picture Production Code, also known as the Hays Code, which was in effect from 1934 to 1968. 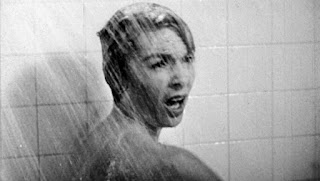 The censors balked at what they perceived as nudity in the shower sequence. Leigh wore moleskin patches to hide sensitive areas, as did her body double, pin-up model and future Playboy cover star Marli Renfro, who took over for more exposed moments. But there also was the opening scene, in which Leigh’s Marion wears only a bra and slip, sharing a hotel room with her divorced lover. The censors wanted that changed, too, but the savvy director tricked them. He sent back a copy of the shower scene that was unchanged, confusing the censors as to whether they had seen something or not. He also invited them to the set where he would reshoot the offending opening scene, but none of the censors showed up. 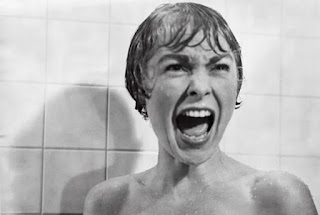 Much of the scene, which was storyboarded in consultation with the legendary designer Saul Bass (and took a week to film), was shot in extreme close-ups, with swift edits, so that the nudity and violence is implied—felt—but never actually seen. The shower set was constructed so that any of its walls could be removed, allowing the camera to get in close from every angle. And Hitchcock employed a fast-motion reverse shot to make it look like the blade actually pierced Marion’s abdomen. The shrieking strings of composer Bernard Herrmann’s score ratchet up the tension.(It was a novel use of violins, which had usually been employed in film soundtracks to enhance a sense of romance or pathos.) Hitchcock at first resisted them, planning to use no soundtrack at all for the scene. To make the experience even more palpable, the sound of Marion’s flesh yielding to the knife was created by stabbing a casaba melon. Hitchcock had his crew audition multiple varieties of melon until they found the right kind. 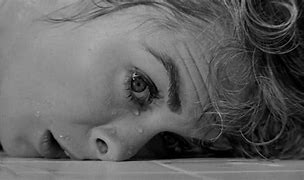 Audiences have had six decades to adjust to such visual frenzy, but in 1960, the same year when wholesome, traditional films like Swiss Family Robinson and Please Don’t Eat the Daisies also dominated the box office, watching it might have induced panic.

For the complete article, click here, and to watch the shower scene, click here! Have you ever seen Psycho? Thanks for visiting and have a great week!

Posted by Maria McKenzie at 2:15 PM