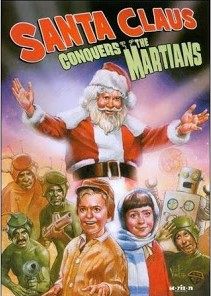 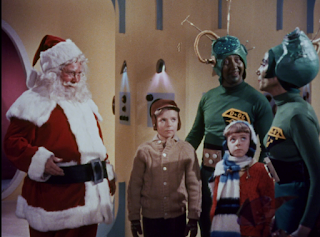 Chochem notes that he had seen this coming "for centuries", and says the only way to help the children is to allow them their freedom and be allowed to have fun. To do this, they need a Santa Claus figure, like on Earth. Leaving the Chochem's cave, the Martian leaders decide to abduct Santa Claus from Earth and bring him to Mars. As the Martians could not distinguish between all the fake Santas, they kidnapped two children to find the real one. Once this is accomplished, one Martian, Voldar, who strongly disagrees with the idea, repeatedly tries to kill Santa Claus along with the two kidnapped Earth children. He believes that Santa is corrupting the children of Mars and turning them away from the race's original glory.
It goes on, but you can tell from this that it's pretty bad, very funny, and not your average Christmas movie! Do you have any Christmas cult classics you'd like to share? Thanks for visiting and have a great week!
Posted by Maria McKenzie at 3:43 PM

I've heard of this one, but never saw it.

Not a movie to be sorry you've missed;).