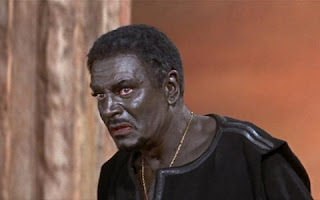 Laurence Olivier as Othello
Here are some interesting facts about Paul Robeson's performance that I thought would be fascinating to share. This is from American Treasures of the Library of Congress:

A leading British Shakespearean critic, John Dover Wilson, called the performance of Paul Robeson the most notable Othello of the twentieth century.

The son of an ex-slave,Robeson became an All-American football hero as well as an actor and singer. He first played Othello in London in 1930, with noted British actress Peggy Ashcroft (1907-1991) as Desdemona. As the first time since the 1860s that a black actor had played the title role, the production marked a turning point that opened the way for other blacks to play the part.

In 1943, Robeson played Othello in New York in a production directed by Margaret Webster and starring Uta Hagen (1919-2004) as Desdemona and her husband Jose Ferrer as Iago. According to the New York Times, Robeson "gave to the role a majesty and power that had seldom if ever been seen on the American stage. The performance won Robeson the 1944 Donalson Award (a forerunner of the Tony).

Posted by Maria McKenzie at 2:10 PM

I am familiar with his name, but have never seen any of his work. The only version of Othello I've ever seen was the mid-90s version with Laurence Fishburne in the title role and Kenneth Branagh as Iago.

I have never seen the Laurence Fishburne version, but I'd like to!