My Goodreads friend Damon Evans knows I love old movies and asked if I'd ever heard of the African American actress Francine Everett. I had not. So thank you, Damon, for bringing her to my attention. She was a knockout and refused to be cast in racially demeaning roles as domestics in Hollywood films of the 1930s and and '40s. Instead, she was a star of Race Films, films made by black studios that catered to black audiences. Here's more from Wikipedia: 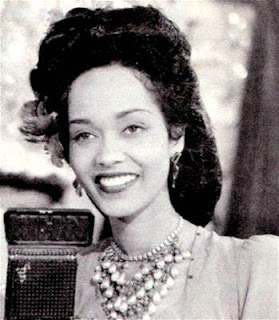 She was born Franciene Williamson in Louisburg, North Carolina in 1915, and her father Noah was a tailor. She married Booker Everett in 1933 when she was 18. This marriage was dissolved, and she later married actor Rex Ingram. They divorced three years later in 1939. She studied and acted with the Federal Theater in Harlem, which was sponsored by the Works Progress Administration. 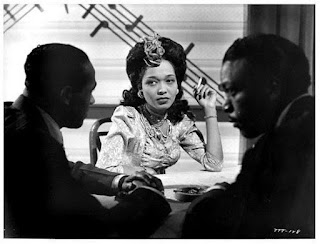 Everett appeared as a singer in more than 50 short musical films that were produced in the 1940s, notably Ebony Parade (1947), which co-starred Dorothy Dandridge, Cab Calloway and the Count Basie band. She also worked as a model in print advertisements for clothing and cosmetics.
Everett's association with Hollywood was brief and desultory. She first arrived in Hollywood in the mid-1930s with husband Rex Ingram, but refused to accept racially demeaning stereotypical roles. After starring in Dirty Gertie from Harlem U.S.A., she had bit parts in two Hollywood films: Lost Boundaries (1949) and Sidney Poitier's first film, No Way Out (1950). 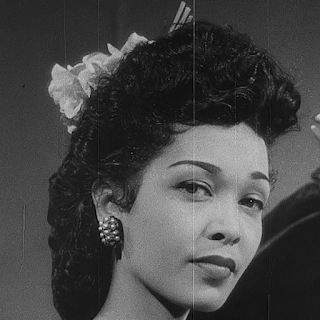 At the height of her career, Everett was dubbed "the most beautiful woman in Harlem" by columnist Billy Rowe in The Amsterdam News, a black-owned newspaper in New York City. Looking back at her career, filmmaker William Greaves commented: "She would have been a superstar in Hollywood were it not for the apartheid climate in America and the movie industry at the time."
To find out more about Francine Everett, click here. To see her perform, check out Dirty Gertie From Harlem USA and "If This Isn't Love."
Had you ever heard of Francine Everett? Thanks for visiting and have a great week!
Posted by Maria McKenzie at 5:15 PM