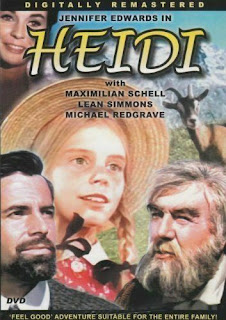 ESPN Featured an article on the NFL's Ten Biggest Mistakes. I am by no means a football fan, but since my hometown team the Bengals are going like gangbusters, I'm a little more interested than usual.

When I was a kid, however, I had no interest at all. As a matter of fact, I probably watched the movie Heidi that's discussed in the following article. I also had the Heidi doll that came in a red carrying case. She waved when you pressed her belly button. I also had the Jan doll, Heidi's Japanese friend. She waved too.

Enough of my reminiscing about Heidi. The following scenario would never happen today, but many little girls back in 1968 were happy it did.

Imagine a time when America's broadcasters prioritized their Sunday night movie schedules more than the outcomes of football games. Well, kids, it used to go that way.

The most famous instance came in 1968 during an AFL matchup, when NBC switched from a Jets-Raiders game to the children's movie "Heidi" as soon as the clock struck 7 p.m. ET. At the time of the switchover, the Jets led 32-29 with 1 minute, five seconds remaining. No one saw the Raiders drive the field for a winning touchdown. 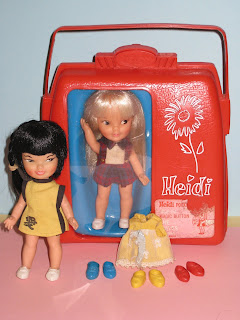 NBC later issued a statement calling it a "forgivable human error" driven by the desire to maintain a scheduling commitment to kids. The resulting outcry was an eye-opener for the television industry, which soon realized the intensity with which games were viewed.

The merged NFL eventually asked broadcasters to televise the conclusion of games in the home markets of visiting teams, regardless of the time it delayed other programming. It was not until 1973, however, that NFL games were televised in their home markets. Until then, owners blacked them out to encourage tickets sales. This is one lesson the NFL learned quite well: Television is king.

To read about the other 10 football mistakes, check out the ESPN article. Thanks for visiting and have a great week!

Posted by Maria McKenzie at 6:12 PM

Admittedly I don't understand the appeal of football.

Quite frankly, neither do I:)!