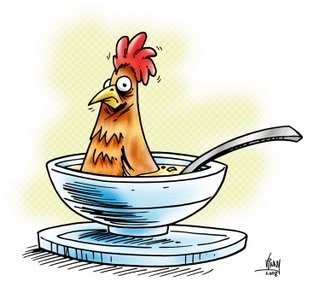 Nothing hits the spot on a cold winter evening like a bowl of home made chicken soup, and today I'm sharing my all time favorite recipe, adapted from one in the Cincinnati Enquirer. Unfortunately, lots of cutting and chopping is involved. Listen to an audiobook to keep yourself entertained, and consider this a labor of love since it's so healthy for your family! Make a pot this weekend and enjoy!

Does your family have a chicken soup recipe that's been past down from generation to generation? Tweet me @: maria_mckenzie. Thanks for stopping by and have a great weekend!
Posted by Maria McKenzie at 1:32 PM

I also made chicken soup. I can't believe how yummy a good bowl is. So good. Num num num. Have a most excellent weekend.

My daughter made a wonderful tomato soup today - it was great. This one looks terrific too! Thanks :)

LOVE my chicken soup and so does everyone else in the family!

And yes, I prepare the vegetable with the headphones on and listening to some great story.

My tip - I use the slow cooker for cooking the soup and after I take out the chicken pieces to take of the meat I "mash" the vegetables before adding the meat back in. MY KIDS love it even more now as they don't know that there are vegies in it as well .... :-)

Ooo! You made me want some chicken soup, and YES, it is so cool that there is scientific/logical reasons for why chicken soup works for making someone feel/get better. Happy weekend!

Sounds soo good right now. It's interesting that an old remedy can now be scientifically proven to help.