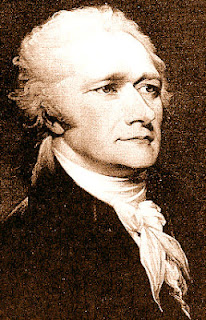 Thanks for visiting and have a great week!
Posted by Maria McKenzie at 11:38 AM

Wonderful and fascinating as always! I know very little of Mr Hamilton so thank you for this most intriguing post! It sad that he had to defend his ancestry when alive but glad that his legacy survives!

I knew some aspects about his past, but not that.

Poor Hamilton... ill fated to meet a bad end at the hands of a cranky Vice President. That didn't happen again until Cheney.

@Old Kitty: He'd be surprised at how times have changed!

@Eve: I think he's handsome too! I'd say his is the most handsome face on currency;).

@William: Ha! You are such a rascal! Only you would think to point that out;)!

William never misses a chance to take a shot at Cheney (pun intended).

And a clever pun at that, LOL!

I hadn't heard about this - you always find the most fascinating bits of history!

I'd heard it years ago, then my mom mentioned it the other day after learning about it from a friend. She was surprised I knew and thought it might be a fun blog topic. I agreed, as you can see:)!

I'd read th back-and-forths about Hamilton's genealogy and was convinced by th obvious errancy of th story that Hamilton's mother was kept hidden for political expediency, to be evidence of a conspiracy to make him more African than he was!

If you're a good person, the goodness will continue through your
descendants. See the link below for more info.

So, having been to St. Kitts this past November 2016, I learned of the JEFFERSON PLANTAATION. Well, Alexander Hamilton was sent to live on the JEFFERSON PLANTATION at age 13, and was put in charge of the books. It was seen that he had a keen sense of money and organization, so Thomas Jefferson's GRNDFATHER PAID for Hamilton's passage to the Colonies and attendance at King's College. My contention is that Jefferson's grandfather WAS Alexander Hamilton's Biological father, therefore Thomas Jefferson's uncle and sent to the Colonies to assist with a new government under Jefferson. This set up the intense rivalry, and set the stage for their strife. Hamilton was against slavery. Jefferson gave abolition lip service but kept slaves and married his wife's 1/2 sister, and eventually manumitted. Hamilton was of African ancestry, Jefferson knew this and always wanted to distance himself from Hamilton so the truth would not be exposed.