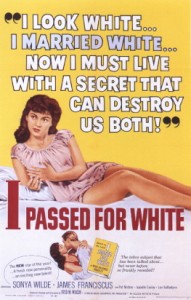 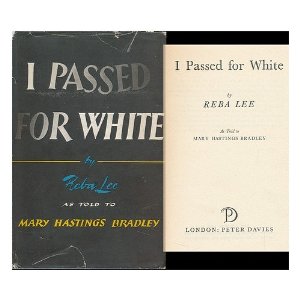 Thanks for visiting and have a great week!
Posted by Maria McKenzie at 11:28 AM

Very interesting and sad that the author didn't or couldn't feel comfortable embracing exactly who she was rather than trying to pass for something she wasn't. Sounds like a fascinating book and movie.

It seems that the people who do pass lead incredibly painful lives, especially if they cut off ties with their families. Sad:(.

I've never heard of that one...but I'll be looking for it, too. Gotta love that movie poster...can it get any more Pulp Fictiony?

@Teri Anne: Tell me about it, LOL!

I hadn't seen or heard of this movie either! When I saw the title, I was wondering if it was about the actress you profiled here a few months ago (whose name now escapes me). Fascinating story!

I profiled Fredi Washington a few months back. This actess is Sonya Wilde. I'm not sure whatever happened to her.

I thought Imitation of Life and Pinky were the only movies around about passing. I guess those are the only ones that I know of!

Wow - I can't even imagine how difficult that would be. No ties to family, constant worry. Intense.

I agree. Some have done it, but I can only imagine their pain.

I haven't heard of the film, or the book before.

Yup--I don't think many people have.

Passing, by Nella Larsen, is a classic on this topic. Reading that and the occasional short story - it was a popular plot in African American lit of the 20s and 30s - it's often depicted as causing a kind of soul sickness.

Apart from the fact that Reba Lee lived before 1967, there is still evidence that people whose skin tone is a darker shade than "socially acceptable" continues to be problematic at least in parts of the USA.
Ms Lee's capabilities earn her job offer as a typist yet her race of "Negro" demotes the employment prospects to an elevator operator!
Similarly, here in Australia, when a light skinned Indigenous person signed rental agreement which was rescinded when her husband was discovered to have darker tone, despite both having permanent work.
Character, ability, ought to hold more sway than how much skin pigment melatonin creates in an individual.
I'm grateful that God loves us equally. It would behove us to respect His workmanship.