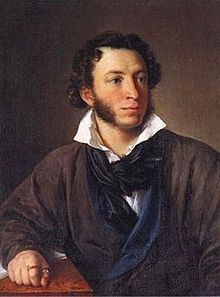 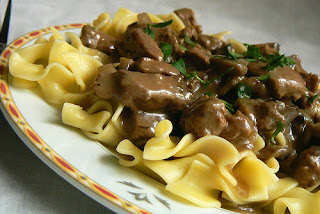 Happy eating! Do you have a favorite version of beef stroganoff? Thanks for visiting and have a great week!
Posted by Maria McKenzie at 11:45 AM

Yummy, you have me drooling and the story about Pushkin is interesting too. Thanks for the educational morsels of deliciousness.

You're so very welcome:)!

Lovely to read that Pushkin was proud of his ancestry!!

I have a great fondness for beef stroganoff. It's been too long since I've had some.

I didn't know that about Pushkin... though I did take note of a biography just released about the father and grandfather of the two Dumas writers, a soldier who was the mixed race son of an aristocrat and a Haitian slave.

@Old Kitty: That was refreshing!

@William: Dumas is on my list to blog about!

I used to make one with tofu and veggie meat. It was so good but I have to stay away from soy now. It's not good for everyone.

That sounds delicious! I love tofu, but I stay away from soy too nowadays:(.

Maria, you find the most fascinating historical facts! The stroganoff sounds delicious, and I'm looking forward to reading more about Alexander Pushkin!

I'm looking forward to reading more in depth about him for the upcoming post. He led a colorful life and died young!