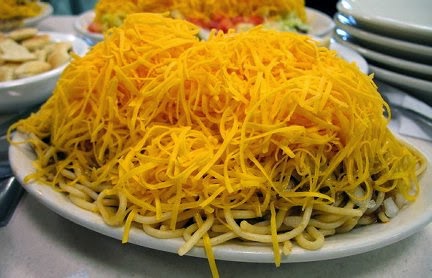 I originally posted this recipe back in September of 2010. I don't know about you, but the windchill where I live could drop to -30 this evening. Cold temperatures call for a nice hot bowl of chili, and this is one of the best recipes around.

Texas may be known for great chili, but only Cincinnati can claim, and boast of, Cincinnati Chili!

You might be wondering just how it came to be. Well, in 1922, Tom Athanas Kiradjieff, a Macedonian immigrant, along with his brother John, opened a hot dog stand with Greek style food called The Empress.

Cincinnati is still behind the times, so you can imagine that in 1922, there was no interest whatsoever in Greek cuisine.  Business at The Empress was pretty poor, but one dish became popular.  Tom called his spaghetti "chili," and made it with Middle Eastern spices.  Although served in several different ways, one of the best known was the Five Way:  Spaghetti  covered with chili, then a layer of chopped onions, then kidney beans, and then topped with cheddar cheese.  This was served with oyster crackers, and a side order of hot dogs topped with cheese.  For more information on Cincinnati Chili, visit: http://www.whatscookingamerica.net/.

The recipe I'm sharing is based on one I found in the Cincinnati Enquirer that's actually called "Slap Yo' Mama Chili." It won a local chili contest in Cincinnati about ten years ago.  I've adapted it by leaving out the 1/2 cup of butter, and the congealed fat.  This version is relatively low in fat and extremely hearty.  Once you've tasted it, you'll never go back to ordinary chili--like what they have in Texas.

It's great just plain in a bowl, with saltines or cornbread on the side.  It's also wonderful on hot dogs, or over rice.  And of course, it makes awesome chili spaghetti!  Don't forget the cheese and onions!  Sour cream is good, too. Enjoy!

What's your favorite chili?  I mean your favorite up to now, because once you've tasted this...
Posted by Maria McKenzie at 7:50 PM

I must admit, it's the beans part of chili I object to!

I love Skyline! But my favorite is my husband's venison chili, which is more of a Texas-style. This one sounds really good, though!

I remember when you posted this a while back. The cocoa is the best part of this recipe.

I love a bowl of chili when it's cold outside! I've never tried Cincinnati chili, but it sounds delicious!

@William: Try it, but leave out the beans;). A friend of mine made a wonderful chicken chili. It had no beans! I'll have to share that one. That'll be a chili you can actually enjoy:).

@Jennette: I love venison, but never had it in chili. It must be mighty good!

@Shelly: The cocoa does add a little something extra!

I love chili and this sounds soooo good.

Hi, Eve! Like your new name;). Yes, this is really tasty!