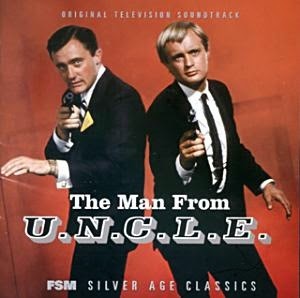 The Man from U.N.C.L.E. was one of my favorite TV shows when I was a kid. As a six-year-old , I had a desperate crush on blond spy David McCallum, who played Russian Illya Kuryakin, to Robert Vaughn's American Napoleon Solo.

If you're not familiar with the series, here's the gist from Wikipedia:


U.N.C.L.E.'s adversary was T.H.R.U.S.H.... The original series never divulged what T.H.R.U.S.H. represented, but in several U.N.C.L.E. novels by David McDaniel, it is the Technological Hierarchy for the Removal of Undesirables and the Subjugation of Humanity, described as founded by Col. Sebastian Moran after the death of Professor Moriarty at the Reichenbach Falls in the Sherlock Holmes story, "The Final Problem."


T.H.R.U.S.H.'s aim was to conquer the world. Napoleon Solo said, in "The Green Opal Affair", "T.H.R.U.S.H. believes in the two-party system — the masters and the slaves," and in the pilot episode ("The Vulcan Affair"), T.H.R.U.S.H. "kills people the way people kill flies — a reflex action — a flick of the wrist." So dangerous was T.H.R.U.S.H. that governments — even those ideologically opposed, such as the United States and the Soviet Union — had cooperated in forming and operating the U.N.C.L.E. organization. Similarly, when Solo and Kuryakin held opposing political views, the friction between them in the story was held to a minimum.

The show was quite fun to watch with all the espionage and intrigue! And there was just enough humor to lighten the mood. I recently saw that a new movie is coming out this summer based on the series. I'll see it, but I hope it's as entertaining as the original!
Were you a fan of The Man from U.N.C.L.E.?
Thanks for visiting and have a great week!
Posted by Maria McKenzie at 2:01 PM

It still is fun, Maria--it's currently running on MeTV!

OMGosh--I'll have to find it! The last re-runs I saw were probably over 20 years ago:).

I've heard of it, but never saw it. As to the movie, the presence of Armie Hammer alone will make me skip it.

Skip the movie, but check out the TV re-runs! I think you'll enjoy them;).

Like Sir Wills, I've heard of it but have never watched it. Interesting premise.