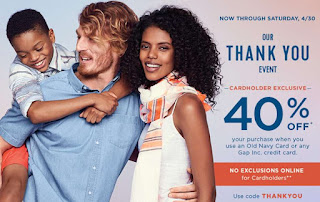 Then Twitter fought back. Supporters of Old Navy's ad campaign, including many interracial families and friends, tweeted messages with the hashtag #LoveWins, a term that went viral last year after the Supreme Court's marriage equality ruling. Fans of Old Navy's message took the hashtag to heart and tweeted messages of support as well as personal photos showing their own diverse families.
American families are increasingly diverse, with Pew Research Center finding that 12 percent of newlyweds in 2013 married someone of a different race, a record high.
For the complete article, click here. The times they are a changin'. Too bad some opinions aren't.
Any thoughts? Thanks for visiting and have a great week!
Posted by Maria McKenzie at 12:36 PM

This ad- or should I say the backlash to this ad sent me into Old Navy to shop last week. Old Navy and other Gap brands have been inclusive for quite sometime. As a commercial actor, I've been auditioning for more spots where race has been a non issue. More and more spots and ads featuring families of all kinds are airing. Madison Avenue is moving forward and reflecting the ever changing American population.

If there are any degenerates around, it's someone like that racist buffoon. I rather like the ad campaign.

@Donna: The majority of the population is changing. Just not sure what's wrong with those who are having a problem:(.

Someone is still making an issue of this? I think it's a great ad (Old Navy's had some real stinkers in the past--at least this one is a solid, family-oriented campaign.)

People are off their rockers regarding certain things. There's nothing wrong with interacial marriages. One of King Solomons wives had dark skin.

@Norma: It's a nice ad. Some people are just stuck in a different century:(.

@Shelly: Some folks are off their rockers regarding this. Sad...

old navy customer feedback
Old Navy Customer Survey Usability Score:
We completed the company’s survey from a laptop, a tablet and a smart-phone. Here are our ratings for each of them. These ratings take into account the length of the process, information required and overall performance of the website:

• Laptop/PC experience: 4/5 stars – the website loads quickly but the survey requires approximately 10 minutes to complete, and you will be asked to submit your receipt.
• Smartphone experience: 1/5 stars – Old Navy doesn’t offer a dedicated page for smart-phones. Nevertheless, it is still possible to complete the customer satisfaction report without it. Obviously, it will take more than 10 minutes to complete.
• Tablet experience: 2/5 stars ¬– As you probably expect, there is also no mobile tablet page available. The good news is that the website works smoothly from this mobile device. It will still take a while or you to type in all the information.