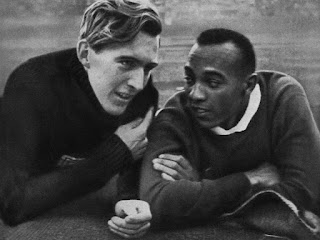 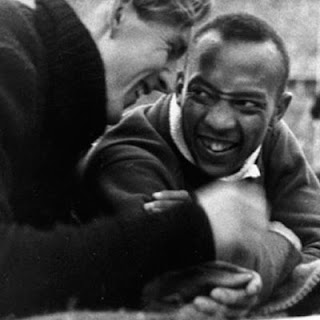 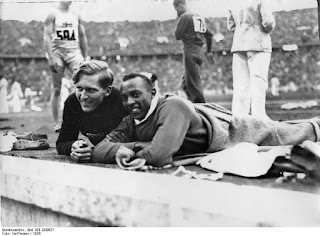 Long served in the Wehrmacht during World War II, having the rank of Obergefreiter. During the Allied invasion of Sicily, Long was killed in action on 14 July 1943. He was survived by two sons, Kai-Heinrich and Wolfgang. Kai was born on 13 November 1941 and Wolfgang was born on 30 May 1943, but died on 6 March 1944.
Long and Owens corresponded after 1936. In his last letter, Long wrote to Owens and asked him to contact his son after the war and tell him about his father and "what times were like when we were not separated by war. I am saying—tell him how things can be between men on this earth". After the war, Owens traveled to Germany to meet Kai Long, who is seen with Owens in the 1966 documentary Jesse Owens Returns to Berlin, where he is in conversation with Owens in the Berlin Olympic Stadium. Owens later served as Kai Long's best man at his wedding.
Touching story! Were you familiar with it?
Thanks for visiting and have a great week!
Posted by Maria McKenzie at 12:38 PM

I've heard of the movie, but I was not familiar with this story.

It was new to me too. I knew that Long helped Owens, but I didn't realize the friendship that happened as a result.