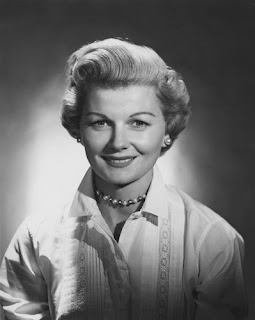 Mother's Day was yesterday, so today I thought I'd share a little something about Barbara Billingsley. If you're not familiar with that name, she's the actress best known as June Cleaver, one of the world's greatest TV moms from the sitcom Leave it to Beaver.

While playing a mom on TV, she was also a mom of two boys in real life, so here's some interesting trivia about that, courtesy of Wikipedia.:

"She was the ideal mother", Billingsley said of her character in 1997 in TV Guide. "Some people think she was weakish, but I don't. She was the love in that family. She set a good example for what a wife could be. I had two boys at home when I did the show. I think the character became kind of like me and vice versa. I've never known where one started and where one stopped." As for the idealized TV family onLeave It to Beaver, which continues in reruns on cable more than half a century after its debut, Billingsley had her own explanation for the Cleavers' enduring appeal. "Good grief," she told TV Guide, "I think everybody would like a family like that. Wouldn't it be nice if you came home from school and there was Mom standing there with her little apron and cookies waiting?"
Billingsley, however, questioned her character's reactions to the Cleaver children's misbehavior, basing her concern on personal experience as the mother of two sons. As the co-producer Joseph Connelly explained, "In scenes where she's mad at the boys, she's always coming over to us with the script and objecting. 'I don't see why June is so mad over what Beaver's done. I certainly wouldn't be.' As a result, many of Beaver's crimes have been rewritten into something really heinous like lying about them, in order to give his mother a strong motive for blowing her lady-like stack."

I watched reruns of Leave it to Beaver while growing up and thought she was a great mom. My mom was and is still a great mom, but she never wore pearls and heels while doing housework! Did yours?

Thanks for visiting and have a great week!
Posted by Maria McKenzie at 12:19 PM

Email ThisBlogThis!Share to TwitterShare to FacebookShare to Pinterest
Labels: Barbara Billingsley, Leave it to Beaver

My mother had jewelry, but I can't recall her ever wearing much of it.

I don't remember Mom every wearing much jewelry--and she never wore dresses, except to funerals.

@William: Same here, unless for an evening out;).

@Norma: I think my mom wore dresses more than pants, and jewelry not that much.