I love old movies and reading about Hollywood's Golden Era. I lived in North Carolina for a number of years and regret that I never made it to Smithfield to visit the Ava Gardner Museum. 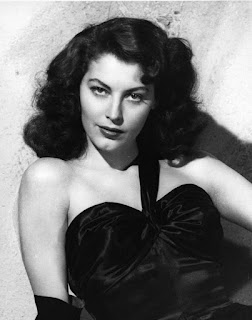 Although I admire her work, I'm not a huge Ava Gardner fan and I haven't seen too many of her movies, but there's certainly no doubt she was a superstar and a true beauty! Nowadays people talk about certain types of "privilege." Ava had what I'll refer to as beauty privilege. 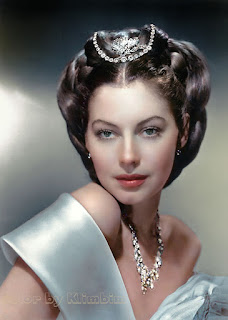 Wikipedia says: Gardner was visiting her sister Beatrice in New York in 1941 when Beatrice's husband Larry Tarr, a professional photographer, offered to take her portrait. He was so pleased with the results that he displayed the finished product in the front window of his Tarr Photography Studio on Fifth Avenue. 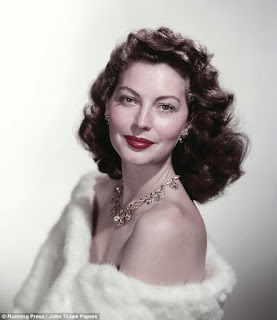 A Loews Theatres legal clerk, Barnard Duhan, spotted Gardner's photo in Tarr's studio. At the time, Duhan often posed as an MGM talent scout to meet girls, using the fact that MGM was a subsidiary of Loews. Duhan entered Tarr's and tried to get Gardner's number, but was rebuffed by the receptionist. Duhan made the offhand comment, "Somebody should send her info to MGM", and the Tarrs did so immediately. Shortly after, Gardner, who at the time was a student at Atlantic Christian College, traveled to New York to be interviewed at MGM's New York office by Al Altman, head of MGM's New York talent department. 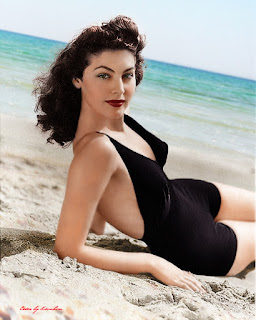 With cameras rolling, he directed the 18-year-old to walk towards the camera, turn and walk away, then rearrange some flowers in a vase. He did not attempt to record her voice because her Southern accent made it almost impossible for him to understand her. Louis B. Mayer, head of the studio, however, sent a telegram to Altman: "She can't sing, she can't act, she can't talk, She's terrific!" She was offered a standard contract by MGM, and left school for Hollywood in 1941 with her sister Beatrice accompanying her. MGM's first order of business was to provide her with a speech coach, as her Carolina drawl was nearly incomprehensible to them.
There was certainly more to Ava Gardner than her sultry good looks, so to read more about her, click here.
Are you an Ava Gardner fan? Thanks for visiting and have a great week!
Posted by Maria McKenzie at 12:34 PM

I wasn't aware there was a museum for her.

I believe it's Smithfield's main attraction;).

I know this sounds strange and boastful, but my mom was a blue-eyed version. We never could fathom how we had such a gorgeous mother, while others had regular moms. My mom was an architectural design engineer though. She should have been a movie star! The resemblance makes it hard to watch Ava Gardner movies, but I watch them and cry. :)

Hi Eve! I remember you mentioning that your mother looked like Ava Gardner. That kind of beauty is from another world, and your mom had that beauty and brains too!

I know who she was, but I haven't seen any of her movies. I've always been more impressed by intelligence and a sense of humor than by looks.

I guess the majority of her movies don't really appeal to me either, which is why I haven't seen many of them.

Third time's a charm - no typos in this version, I hope!

My father was the "Barnard Duhan" named in your post. (His name was actually Bernard but his nickame was Barney.) He loved to tell this story, emphasizing how, as a young man, he thought Gardner's photo was the most beautiful he had ever seen.

About 8 years after this, he met my mom (also a beautiful woman) but in a more straightforward way. A mutual friend set them up to play handball together at the Y.

Yes, there was much more to Gardner than her looks! She had to learn so much so fast to succeed! And at a time when the movie business was even harder on women than it is now.