West Side Story: How it All Began 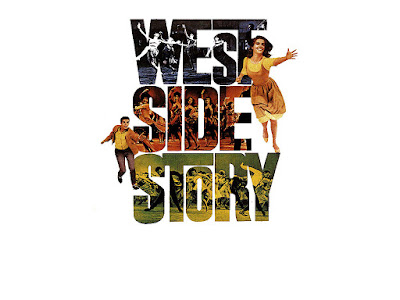 Yesterday, hubby took me to see what we thought would be a theatrical production of West Side Story. I've actually seen it onstage before, but I prefer the motion picture. So I was pleasantly surprised to find out what we'd be seeing was the movie with live orchestral accompaniment! There's a new technology that strips the music from the vocals of the film, so a live orchestra (in this case The Cincinnati Pops) can play the score. Needless to say, it was quite an enjoyable experience! But something I learned from our program was that West Side Story was originally conceived as East Side Story and the two conflicting sides were Catholics and Jews. I had to find out more, so here's what I discovered in Wikipedia: 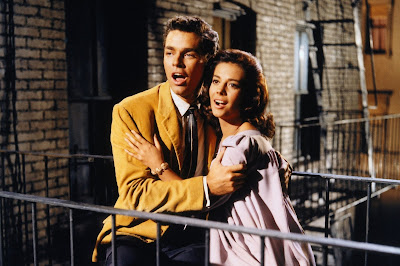 In 1947, Jerome Robbins approached Leonard Bernstein and Arthur Laurents about collaborating on a contemporary musical adaptation of Romeo and Juliet. He proposed that the plot focus on the conflict between an Irish Catholic family and a Jewish family living on the Lower East Side of Manhattan, during the Easter–Passover season. The girl has survived the Holocaust and emigrated from Israel; the conflict was to be centered around anti-Semitism of the Catholic "Jets" towards the Jewish "Emeralds" (a name that made its way into the script as a reference).
Eager to write his first musical, Laurents immediately agreed. Bernstein wanted to present the material in operatic form, but Robbins and Laurents resisted the suggestion. They described the project as "lyric theater", and Laurents wrote a first draft he called East Side Story. Only after he completed it did the group realize it was little more than a musicalization of themes that had already been covered in plays like Abie's Irish Rose. When he opted to drop out, the three men went their separate ways, and the piece was shelved for almost five years. 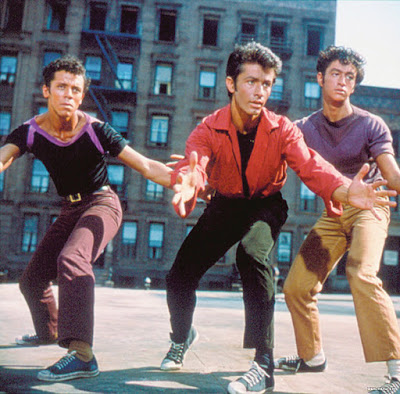 In 1955, theatrical producer Martin Gabel was working on a stage adaptation of the James M. Cain novel Serenade, about an opera singer who comes to the realization he is homosexual, and he invited Laurents to write the book. Laurents accepted and suggested Bernstein and Robbins join the creative team. Robbins felt if the three were going to join forces, they should return to East Side Story, and Bernstein agreed. Laurents, however, was committed to Gabel, who introduced him to the young composer/lyricist Stephen Sondheim. Sondheim auditioned by playing the score for Saturday Night, his musical that was scheduled to open in the fall. Laurents liked the lyrics but was not impressed with the music. Sondheim did not care for Laurents' opinion. Serenade ultimately was shelved. 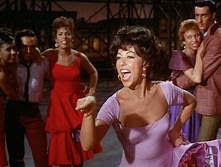 Laurents was soon hired to write the screenplay for a remake of the 1934 Greta Garbo film The Painted Veil for Ava Gardner. While in Hollywood, he contacted Bernstein, who was in town conducting at the Hollywood Bowl. The two met at The Beverly Hills Hotel, and the conversation turned to juvenile delinquent gangs, a fairly recent social phenomenon that had received major coverage on the front pages of the morning newspapers due to a Chicano turf war. Bernstein suggested they rework East Side Story and set it in Los Angeles, but Laurents felt he was more familiar with Puerto Rican immigrants and Harlem than he was with Mexican Americans and Olvera Street.
The two contacted Robbins, who was enthusiastic about a musical with a Latin beat. He arrived in Hollywood to choreograph the dance sequences for The King and I, and he and Laurents began developing the musical while working on their respective projects, keeping in touch with Bernstein, who had returned to New York. When the producer of The Painted Veil replaced Gardner with Eleanor Parker and asked Laurents to revise his script with her in mind, he backed out of the film, freeing him to devote all his time to the stage musical.

And the rest is history! For more on the story, click here. Have you seen the movie version or a stage production of West Side Story? It's one of my favorite movies! Thanks for visiting and have a great week!
Posted by Maria McKenzie at 4:18 PM

Email ThisBlogThis!Share to TwitterShare to FacebookShare to Pinterest
Labels: West Side Story

Occasionally up here movies are being done the same way- with a live full accompaniment by orchestra. In Toronto they're going through the Harry Potter series that way.

Very interesting! I'd love to see more movies this way:).

hey maria al altman mgm talent scout is my great uncle he is my grandfathers brother.. i feel so honored i wish i would have known him