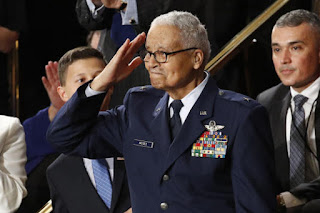 I read today in the New York Daily News that one of the last surviving Tuskegee Airmen has died:

Brig. Gen. Charles McGee was 102 when he died in his sleep Sunday morning, with his right hand over his heart in a final patriotic gesture, his family said.

McGee battled fascism abroad and racism at home, both in the name of serving his country.

He was part of the group of Black aviators in the U.S. Army Air Corps., a precursor of the U.S. Air Force. Collectively they flew more than 15,000 individual sorties in Europe and North Africa during World War 2.

“Our task was to keep the air clear of German pilots,” McGee said in a 2020 Air Force video.

Their service earned them medals, and their performance paved the way for integration of the U.S. armed forces, according to History.com.

McGee was a cut above even that. He went on to fly for another 30 years as an Air Force pilot in the Korean and Vietnam wars, for a total of 409 aerial fighter missions — a record that still stands today. 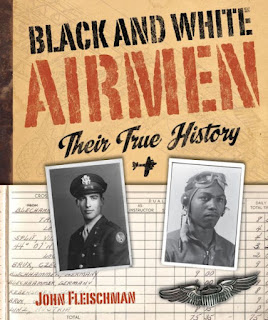 Reading about Brig. Gen. McGee brought to mind a book I've blogged about before. I happened to find it by accident one day while browsing at the library.  It's a kid's book (6th grade and up), but a fascinating account for adults to enjoy, as well.One of the things I liked most about the story was that the two friends featured in it are from Cincinnati. And not long after I read the book, I got to see both of them speak at my sons' school--which is the very same one they attended as young boys!

In John Fleischman's Black and White Airmen: Their True History, we learn about the true history of a friendship that almost didn't happen.

Check out this video to learn more about John and Herb, and be sure to read John Fleischman's Black and White Airmen!
Posted by Maria McKenzie at 1:44 PM

So many veterans of that war have joined their brothers in arms in the hereafter.

What a wonderful human being and great man..!! We need to keep the wisdom of this wise man alive as his legacy...!! God Bless and comfort his family and friends in their time of great grief and great loss as only HE can..!! RIP, Sir and Thank YOU for your service to our great country...!!

@William: Yes, they have!

@Unknwn Guest: Thank you so much for stopping by! Your heartfelt thoughts are appreciated:).