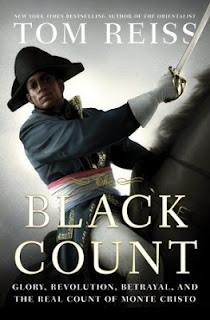 I knew that Alexandre Dumas was of mixed race heritage, but only recently learned about his father, who is profiled in The Black Count: Glory, Revolution, Betrayal and the Real Count of Monte Cristo by Tom Reiss.

A fascinating story! Are you familiar with The Black Count?

Posted by Maria McKenzie at 2:50 PM

I was familiar, yes. A fascinating tale.

You are quite the historian!