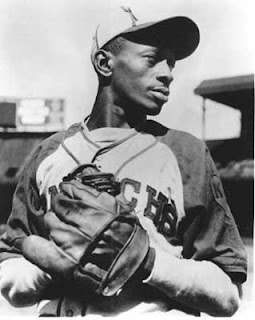 Last Monday, I asked readers what the best piece of writing advice was that they'd ever received. There were lots of great responses, but today I thought I'd focus on one tip in particular, the importance of moving ahead when writing a manuscript.

As Satchel Paige says, "Don't look back." If we do, guess what's gaining on us? The possibility of not being able to complete that book!

Author Norma Beishir says, "Finish the first draft before attempting ANY changes of any kind. Otherwise, the manuscript will never get finished. I'd often give my agent or editor a first draft with the following note: 'Just tell me what's wrong with it.'"

A first draft is a first draft. Robert Masello says that amateur writers don't want to hear about drafts, because they believe that once something's written, it's done. Real writers (the ones who get published), he goes on to explain, know better. They know that the first draft is a working draft.  And it won't be perfect.  But that's alright, because real writers make it from start to finish.

One reason some don't complete their first draft is because they keep looking back.  I was talking to someone working on a children's book.  Although the story sounded awesome, and she'd thought it through from start to finish, she hadn't written that much.

She said she just couldn't get the first few pages to sound exactly like she wanted.  I told her not to worry about that, and keep moving forward.  "You can go back and revise once you've finished writing the story."  I don't know if she took my advice, and even though she listened carefully to what I said, I don't think she  liked the idea all that much!

If we keep looking back, it's as though we become stuck in the mud, obsessing over words and details. But if we move on, we see that there really is an end is in sight!  The finished product might sound  a little rough and sloppy, but that's when the hard work of revising starts, the smoothing and sanding and cutting and shaping of your story.

During revision, whole scenes may be cut and characters eliminated to keep the pace exciting and the story progressing. But the most important thing to remember is that from the rough cut of your first draft (and second, third or more), will emerge a smooth and polished manuscript.

Have you made the mistake of looking back? Are you currently revising a first (second or third) draft?

Tweet me @maria_mckenzie. Thanks for stopping by!
Posted by Maria McKenzie at 11:24 AM

I've definitely made the mistake of looking back; I'll look back, and then my writing will slow, and then the flow of the writing won't be there anymore.

I'm in my nth re-write of my first draft! LOL!!! I'm hoping that a smooth polished diamond will emerge from the mud and muck that is my draft at the moment! Take care
x

I constantly look back, but not to polish. I look back to make sure my characters are being consistent, and my plot doesn't have major oopsie holes in it. That way I know I'm still on the right road as I travel on through the story. I never have probs finishing something though, maybe because I've written 16 novels and know I can do it!

Hi Maria - I absolutely love the rewriting process. It's a great deal of fun.

That said, I think to each their own. I know a success published author who rewrites each sentence as he goes, and it works for him.

I thought this was a great post. Thanks! I can relate.

I get stuck trying to rewrite while still in first draft. I go back and start revising every time I start. Even though I have the idea to the end but on paper it's only five chapters!

yes I have sent some dastardly first drafts out there but now I am teaching myself patience, I write and let it simmer before i go back to edit and tweak, Its all about learning and growing as a writer.

@Old Kitty: I'm also in the "nth" revision stage waiting for that diamond to emerge!

@Carol: Sounds like you look back (like a driver checking the rear view mirror), but keep on going! After 16 novels, no doubt you know you can reach the end:).

@Happy Whisk: I like revising too:). If I were like the writer you know, I'd probably never finish a first draft!

@LJ: Hi, LJ. Thanks for your comment, and thanks for visiting!

@Joanna: I'm revising something that I sent out as a first draft many yeasr ago. Talk about dastardly! It's a learning process, alright!

Yep, looking back is definitely going to hinder progress. Been there, done that. However, having said that, I have gone back. Back to a novel I started six years ago and put down because, you guessed it, I kept looking back. A little wiser and older, I am excited to see it taking shape, finally.

Yes, amazingly enough, that method works great for him. For some, it's their way and doesn't hinder. I say go for it. Do whatever way works best, for that writer.

I jump back and forth all the time, leave alone looking back.
But hey I get there in the end.

I needed to read this today. I really think I am not finishing my MS because I keep looking back. Great advice :)

@Elizabeth: Hi, Elizabeth! Thanks for the follow:). Now that 6 year old novel will actually get finished--woo-hoo!


@Happy Whisk: You're right, whatever works:)!

@Al: Hi, Al! Thanks for visiting. Sounds like looking back isn't a hindrance for you:)!

I agree on the importance of a completed ms! This concept is hard for new writers. For everyone, really. Personally, I re-read the pages I wrote the previous day, to pull me back into my characters, story, and setting.

And I agree with Carol Riggs: We must continually be checking for plot and character consistency.

I've always warned new writers about trying to polish their manuscripts before completing that first draft. I made the same mistake with my first novel, and when the agent who ended up representing it first read it, she told me it was still unpublishable. She took me on anyway, and within a year sold three of my projects for a six-figure advance.

@Pam: I always re-read what I've written the next day, too. It's good to let the words marinate, but then I push forward:).

@Norma: A six figure advance on 3 projects after being told what you'd originally submitted was unpublishable?! You're a lucky lady:)!