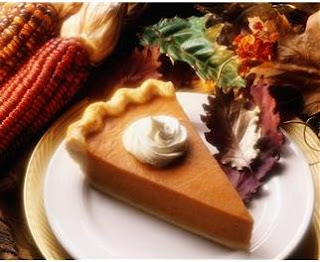 "Vegetables are a must on a diet. I suggest carrot cake, zucchini bread and pumpkin pie." Jim Davis (Pumpkin pie is delicious, but sweet potatoes make a pie that's even better!)

In the northern part of the United States, southern food is referred to as "soul food." And up North, "soul food" is mostly eaten by black people, since the majority of blacks have southern roots.

It wasn't until I began living in the South many years ago, that I realized "soul food" is what all people eat in the South (and rather than being called "soul food," it's just called food).

My husband, originally from upstate New York, moved to North Carolina with his family when he was about nine years old.  He's a white guy, and although his mother didn't cook southern cuisine, he had his fill of it growing up on school cafeteria lunches.

Mr. McKenzie developed a taste for collard greens, something I've never liked that much.  Needless to say, hubby feels a little short changed having married a black woman who doesn't cook greens!

I do, however, cook sweet potatoes, in case you haven't noticed!  And I wouldn't be a real black woman if I couldn't bake a sweet potato pie! (Just kidding, but it sounded good for effect.)

White people above the Mason Dixon Line make pumpkin pies during the holiday season, but Southerners and black folks all over the U.S. bake sweet potato pies.

Today I'm sharing my friend Elaine's recipe.  It's her grandmother's, and it makes the most delicious sweet potato pie I've ever tasted!  Hope you like it too!

This is not a slimmed down version, so just promise to take a walk after eating.  There's enough filling for two 10 inch pies--yum!

Bake sweet potatoes at 350 degrees until soft all the way through.  When cool, remove from skins and mash. Add remaining ingredients, beat until smooth. Pour into 2 10 inch unbaked pie shells. Bake at 425 degrees for 10 minutes, then lower temperature to 350. Bake one hour more. Yield: 16 slices.

Tweet me @: maria_mckenzie.  Thanks for stopping by!
Posted by Maria McKenzie at 12:15 PM

I love sweet potato pie. Oh, and sweet potato mash with butter. Yummy. I don't have a favorite pie though. Headed to enjoy a cup cake and then off to work. Enjoy the rest of your weekend.

ha ha I was about to turn in my black girl card. Sweet Potato pie sounds delicious Maria

Wow. I'd need to walk a marathon after! LOL!! Sounds ever so yummy!! I like courgette cake and banana and chocolate cake (they contain fruit and veg so it has GOT to be good for you!!) Oh but my favourite - has to be christmas caker (fruit cake) left to "rest" for at least 4 months... yum.

Sounds great to me! I'd try it if I weren't so awful in the kitchen....

I've never had it, but it sounds delicious!

There's what's called a sugar pie up here; you combine maple syrup, brown sugar, and sugar together. It tastes like heaven.

Oh, I feel so sorry for the people who've never had sweet potato pie! I've lived in NC nearly all my life (minus 2 years) and grew up eating okra, squash, hominy, and any kind of potato cooked any kind of way.

Greens, though, um, nope. My sister and a friend can cook some that I'll eat; otherwise, ick!

That recipe is delicious; it's the same one my grandmother used.

Hope your holiday was great and that your weekend is relaxing. Unless you're going shopping-then I hope it's productive :)

@Happy Whisk: Hope you have an awesome weekend! BTW, I love sweet potatoes with buttter (brown sugar and cinnamon)!

@Talli: You don't know what you're msiing:).

@Joanna: You can keep your card. But once you master sweet potato pie, you can turn it in for an upgrade:)!

@Old Kitty: I've never heard of courgette cake, but I do love chocolate cake! The only fruit cake I ever liked was one made with a yellow cake batter. It was different, but very good!

@Norma: You could do this. Forget the pie crust and just bake it like a pudding!

@William: Sugar pie? Sounds divine! I'll have to look that recipe up:).

@Words Crafter: So you're a Tar Heel?! I lived there for about 13 years! Beautiful, beautiful state! My mom's from South Carolina, so I grew up on grits, biscuits, baked macaroni and cheese, sweet potatoes, etc. We even used to have chitlins (chitterlings) on New Year's Day until she got health conscious in the early '80s. Enjoy the rest of your Thanksgiving weekend!

I forgot to do sweet potatoes for Thanksgiving and I think my mom might never forgive me.
Wah!

I'm so excited to try this recipe!! I'm a Northern NY girl and since I now live in the South, I have spent ample time looking for a great Sweet Potato Pie recipe. To date, I haven't found one I truly like.

My favorite holiday recipe isn't for a pie. My family has a traditional recipe for pumpkin bread that is so delicious, we make four loaves at a time to satisfy everyone's desire to eat it for breakfast, lunch and dinner. If you're interested, I have the recipe posted here:

Have a great week!

Will try it next year. Yes, we love our sweet taters here in the South. Haven't seen sweet potato ice-cream....yet

@Nicole: Hope you like this recipe! Your pumpkin bread sounds great! I think I'll make it for gifts this year:). BTW, fun legend!